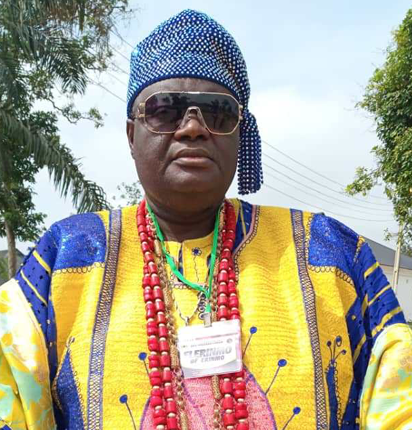 ‘To live is Christ and to die is gain’ was the consolation song the Elerinmo of Erinmo, HRM Oba (Dr) Michael Odunayo Ajayi, Arowotawaya II had to sing as he throws a memorial service for his departed mother, Yeye Oba of Erinmo kingdom, the late Pastor (Mrs)  Sijuwola Sabaina Ajayi who joined her ancestors a year ago.

Oba Arowotawaya II while speaking about his late mother exclusively to City People revealed how much he misses her love, counsel, mentorship and royal tutelage; the late king mother herself being a Princess and a Queen.

The special thanksgiving service will hold today, Sunday 25th April 2021 at CAC No 1, Oke Isegun, Erinmo Headquarters, Osun State, while the reception is scheduled to hold at the Arowotawaya Courtyard, Erinmo.

If you were looking for a woman of substance, a strict disciplinarian, a mother indeed, a wife to envy and an epitome of elegance whose spoken and written English is Queen style, beauty and class look no further than for Pastor (Mrs)  Sijuwola Ajayi the Yeye Oba of Erinmo Land.

Born sometimes in 1940, widely traveled, a retired teacher and educationist who was actively engaged in private business till her death recently. She is well connected within the top echelon of the Nigerian military having taught some of the children of the high and mighty in Nigerian including those of two former Nigerian Heads of State at the Command Children’s School in Ikeja Cantonment and before then in Kaduna

A stickler for discipline and excellence, Mama was a caring, honest mother, grandmother and dutiful wife who dots over her children living long to witness the crowning of her first son as Kabiyesi Elerinmo of Erinmo land some years ago.

Yeye Oba is royalty on all sides, by birth and by marriage, she is a granddaughter of the late High Chief Sapetu Aloba (the traditional prime minister of Igbara-Oke and late High Chief Ejemu Daniel Atere, the 3rd in command to the his Royal Highness the Olowa of Igbara-Oke and was happily married to the late Asiwaju of Erinmo ijesa Chief (Dr) Joseph Olubowale Ajayi the icon of the AROWOTAWAYA Royal lineage of  Erinmo, whose son later became King Arowotawaya II.

A woman of many parts, She was the founding President of the Prestige Social Club of Igbara-Oke, Matron of Facoys Sisters Club of Lagos, Matron Ifesowapo social club of Igbara-Oke, Matron Road Safety club Ifedore chapter, together with her husband, she was blessed with six children (all of whom are graduates and professionals including lawyers, accountants, etc living in various parts of the world)    and several Grand Children.

Up to the time of her departure, she occupied herself with praying interceding for her children, communities and the nation; attending religious, social and traditional occasions that involved her communities and families.

Below are some of the pictures from her burial ceremony.