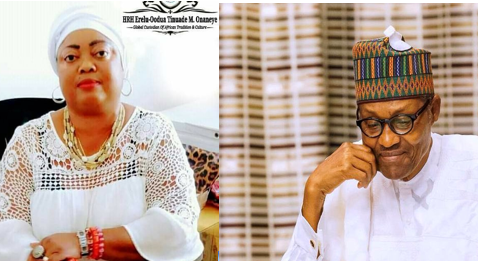 Renown philanthropist, custodian of African culture and tradition Tinuade Mabel Onaneye, The Erelu Oodua of Aye Kingdom has on Tuesday 20th of October, 2020 blamed President Muhammadu Buhari for the on-going protests which have started two weeks ago all over major cities in Nigeria and warned him to act fast before the mass protest degenerate into the much-dreaded revolution.

The resolute and articulate crusader and advocate for true federalism made the declaration from her base in Texas, the United States through a release she signed and made available to the press and the general public via her media aide, Saint-Olawale Jimoh on the beautiful morning of Tuesday, 20th of October, 2020. She emphatically mentioned the moment Nigerian leaders fear so much has finally arrived and that there’s nothing any of them could do about it.

‘Nigerian leaders who have always behaved like Nigerians don’t amount to anything are beginning to realize the masses are no longer the fools and slaves they have been taking them to be. Unfortunately, they are unable to see the handwriting on the wall.’ Erelu stated.

‘In the same vein, I won’t be surprised if President Buhari takes the protests as the handiwork of a few rabble-rousers or at the very worst, opposition elements. It’s pathetic and the reality is staring right at them and borrowing from the words of our own Oonirisha, the youths are now fully awake.’ She added.

Erelu Mabel Tinuade further posited the protest is beyond #EndSARS and that even though the President has switched from SARS to SWAT which basically amounts to renaming the same problem instead of solving it. She assured the movement is for the soul of Nigeria. The masses are in addition to #EndSARS demanding a systemic overhaul of governance and institutional reforms as the barest minimum. She mentioned that judging from reports from Nigeria where for instance a governor was asked to come down from his long convoy before he could pass the roadblocks mounted by angry youths and a few other instances, then the revolution is very near than expected except President acts fast, the unexpected might happen.

It would be recalled that in some of Erelu’s past press statements, she has lamented the poor state of things in Nigeria and the new level of poverty Nigerian masses have been catapulted to by Buhari-led government. She had expressed worry over how Nigerian governments at all level treat the masses like some pieces of cabbage and warned that the masses might fight back if they’re pushed to the wall. Unfortunately, the time has come and she’s hoping the President might enter an agreement or dialogue with the protesters to calm the situation.