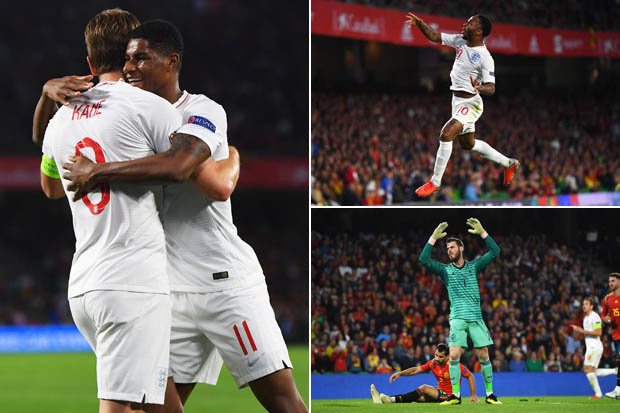 England manager Gareth Southgate praised the “courage” of his side after they beat Spain to claim their first Uefa Nations League victory.

The 3-2 loss was Spain’s first at home in a competitive match for 15 years.

A superb first-half showing from England produced two goals from Raheem Sterling and one from Marcus Rashford, with Spain responding through Paco Alcacer and Sergio Ramos.

Southgate said his side “showed quality” and were “brave”.

He told BBC Radio 5 live: “The quality of the performance – we played with courage and used the ball with courage. If you come and defend for 90 minutes they will unlock you.

“We really showed some quality and a good mentality to play out of their pressing. Spain are very aggressive in the way they press. All our players, right through the team, were brave enough to play the way we wanted to play.

“It’s fine to have an idea of how you want to play but to do it is a huge credit to them.”

England lost 2-1 at home to Spain in their Nations League opener and were held to a goalless draw in Croatia last time out, but they put on a brilliant display in Seville.

The Three Lions became the first team to put three goals past Spain in a competitive home international and won in the country for the first time since 1987.

Southgate, whose side reached the semi-finals at the World Cup in the summer, also named the youngest England team this century.

Former Middlesbrough manager Southgate said: “It’s a great reference for them – when you’re a young player you need wins and positive experiences to refer to, to give you confidence for the future.

“They have to take tremendous belief from that. We won’t get carried away – we still conceded two goals – but it will give them huge belief.”

Asked about the ‘statement’ victory over a major side he had sought, Southgate replied: “It’s one less question we have to answer. There’ll be something else. Tonight the players have gone a step further which is fantastic for them.”

READ ALSO: ANTHONY JOSHUA ALL SMILES AS HE CELEBRATES TURNING 29 WITH CHOCOLATE CAKE