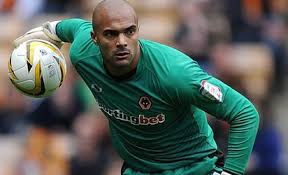 Goalkeeper, Carl Ikeme has been invited by the Nigeria Football Federation, NFF, to join the Nigerian team as a special guest at the pre-World Cup friendly game against England.

The match will be played at the Wembley Stadium on 2nd June.

President of NFF, Amaju Pinnick handed out the invitation when he led a delegation of the board and team staff to visit the goalkeeper at The Christie Clinic in Manchester.

Ikeme, who was diagnosed with acute leukemia, is being treated at the hospital.

“We have also come to seek your permission to be our special guest at the pre- World Cup friendly game against England at the Wembley Stadium on 2nd June,” Pinick said.

“We want you to perform the customary kick-off of that game and if you approve of it, we will immediately request this of The Football Association,” he said.