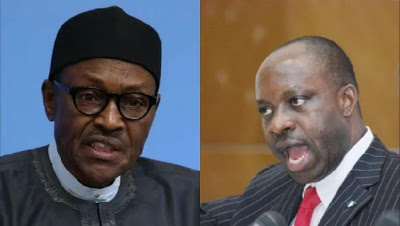 The presidency has replied Former Central Bank Governor, Charles Soludo, who at a function in Enugu yesterday, said President Buhari has worsened the already bad economy he inherited in 2015.

In a statement issued by Special Assistant to acting President Yemi Osinbajo on Media and Publicity, Laolu Akande, the presidency said Soludo is entitled to his opinion. According to Akande, Nigerians are working with facts that have shown that the Buhari-led administration is taking Nigeria out of economic recession. Read the statement below

“Prof Soludo is entitled to his own opinion, and Nigerians entitled to the facts. The opinion he expressed is understandable in a democratic system but the facts are that the challenges of today are a direct result of wrong headed decisions of the past, and quite mind-boggling actions of those who were entrusted with leadership.

Some of those who served in the recent past have validated this assertion. Nigerians have demonstrated that they know the Buhari administration inherited a sorry state of the economy but is working diligently to fix it with positive results now emerging. What even Former CBN Governor Soludo cannot deny is the fact that the Buhari administration has ended the bleeding of the nation and is implementing reforms.

The Buhari administration is spending more on infrastructure at a time when resources are lean. When we had abundant revenues what happened was profligacy and plunder. What no one can deny is that the Buhari administration is now implementing on behalf of ordinary Nigerians a Social Investment Programme that is unprecedented in Nigeria’s history, paying poorest Nigerians N5000 monthly, feeding school children and engaging hundreds of thousands of unemployed graduates. And there is more to come.

The Buhari administration is plugging loopholes in several ways including through the Treasury Single Account, raking in resources that otherwise were hidden and misappropriated and the proper auditing of the Federal payroll discovering about 30,000 ghost workers and saving billions per month.

Another step in the right direction is the fact that Nigeria no longer has to shell out billions of dollars for JVC cash call, bringing relief from a burden that has slowed down investment in the oil industry. There has even been a marked improvement in PMS availability in the country. It is certainly quite curious that very few among us will choose to ignore the new direction but make store of the burdens of past without proper attributions.

This appears to me to be selective amnesia to which they are certainly entitled. What would have been more patriotic is that people of goodwill will join several others working with us in this administration and offer progressive ideas and join hands with a government and administration that every one knows are led by a President and Vice President who are trustworthy and are people of unabashed honesty, and integrity

What Buhari is not telling Nigerians about...