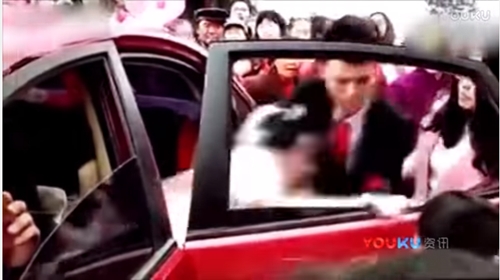 A shocking report by Chinapress has revealed how a bride who thought she could eat her cake and have it received the shock of her life on her wedding day.
It was gathered that the wedding ceremony had gone on well, and the couple had arrived at the reception, to the waiting arms of families and friends, and when the groom got down from the car, everyone had thought he wanted to open the door for his bride.
They were, however, shocked to see him drag out his new wife in rough manner, while the now weeping bride was caught by a vigilant person who led her away as she cried. It turned out that the bride had spent her last night as a spinster with an ex-boyfriend of hers. The groom had received a message on his mobile phone, with a video clip attached and this caused him to be furious.
The video clip was reportedly sent by the ex-boyfriend, which showed him and the bride having s*x the night before.
Watch the video below;
Epic Drama as Ex-boyfriend Ruins a Wedding by Sending Bride’s Sex Video to the Groom (Watch) was last modified: June 9th, 2017 by Arinze Ago

Quit Order: United Nations Finally React to Call by Northern Group for Referendum and Ultimatum Given to Igbos