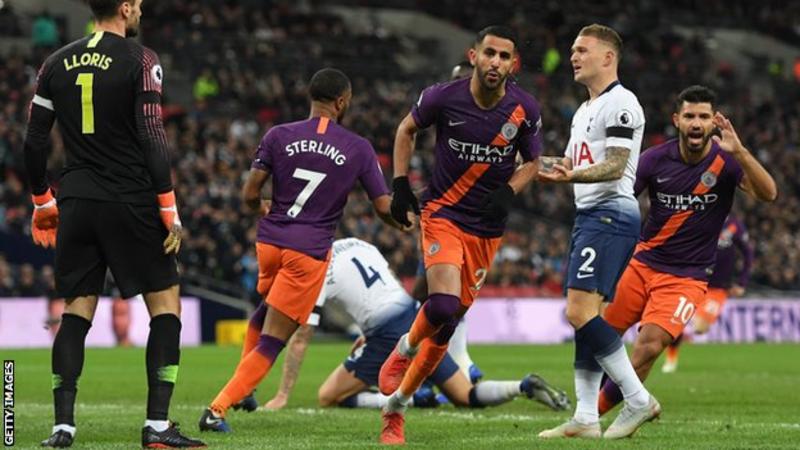 Manchester City returned to the top of the Premier League as Riyad Mahrez’s early goal gave them victory over Tottenham in a scrappy encounter on a Wembley surface scarred by Sunday’s NFL game.

It settled a match made more difficult by a pitch still bearing the markings and after-effects of the NFL encounter between the Philadelphia Eagles and the Jacksonville Jaguars.

City deserved the win and could have avoided an anxious finale had David Silva and Sterling taken second-half opportunities, while Spurs keeper Hugo Lloris saved twice from Sergio Aguero.

Tottenham were restricted to limited opportunities but could have rescued a point late on, only for Erik Lamela to waste a golden opportunity in front of an open goal from substitute Dele Alli’s pass.

City go ahead of Liverpool on goal difference with both teams on 26 points from 10 games.

City sent out another message to those wishing to take their Premier League crown with a win of real significance.

Manager Pep Guardiola prides himself and his team on their purist approach but this was a night for doing some of the dirty work on a poor playing surface against opponents wishing to make a statement of their own after the latest disappointment in their Champions League campaign.

City came out of the blocks fast to score the early goal through Mahrez and set the platform for a deserved win.

If there was a flaw in City’s performance it was a lack of ruthlessness that should have seen the three points secured before an anxious finale, especially in a second-half spell when they over-elaborated.

They showed they have steel in among the artistry as defenders John Stones and Aymeric Laporte, both more than happy to be uncompromising, complemented the silkier approach of David Silva and Bernardo Silva.

City’s win was the sort on which title-winning campaigns are built and they are on top of the Premier League after an opening 10 games that have included visits to Arsenal, Liverpool and Spurs.

Tottenham boss Mauricio Pochettino said in the build-up to this game: “My feeling is the worst feeling I have had in my five years I have been here.”

His dark mood may be the result of delays in the move to Spurs’ new stadium, no summer signings and a Champions League campaign that has started with two defeats and a draw.

This was a night of frustration for Spurs as they struggled to make any serious inroads into City’s defence until that late spell and the miss from Lamela.

Wembley was nowhere near full, with thousands of empty seats, especially around the top tier, while Spurs fans are still coming to terms with the news that one of their icons, Glenn Hoddle, is recovering from a heart attack.

How Micro Finance Banks Will Benefit From Increased CBN Capital Base