EPL Match of The Week: Mourinho vs Pochettino Who Fairs Better 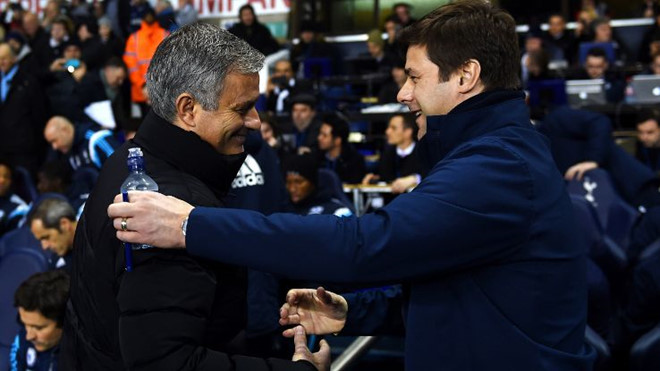 Mourinho and Pochettino will go head-to-head this weekend, and the encounter is an intriguing one, both on the pitch and off it as Manchester United host Tottenham in a crunch EPL early noon tie.

Spurs and United are level on points in the Premier League, and the winner of the match could well solidify themselves as the true challengers to Manchester City’s seemingly endless title charge. Yet in the dugouts, too, there will be intrigues.

Such has been the level of the former Argentina defender’s success in north London, the usually phlegmatic club chairman, Daniel Levy, said just weeks ago that he would like Pochettino to sign on for 15 years at the club.

“I would love nothing more than Mauricio still to be our manager in 10 to 15 years’ time,” the Spurs chairman wrote in a new book about Pochettino, titled ‘Brave New World’.

“To really build success you need time, longevity. It’s easy to go and become a manager at Real Madrid, for instance.

“It’s a fantastic club, don’t get me wrong, but winning at Tottenham Hotspur is far greater than winning at Real Madrid — and he agrees.

Spurs are quick, incisive, and able to change their gameplan at will. Tottenham have brutalized teams, thumping the likes of Manchester City, Chelsea and United since the Argentine took over.

They play football “the United way”, and it is not difficult to envisage the latter building a legacy at Spurs, in the same vein as Ferguson at United.

Yet, for Mourinho – pragmatist extraordinaire, who regularly sets up a team blessed with magnificent attacking players to avoid defeat – United is another job.

He does not intend to retire at the club , and may seek alternative employment at another super club if he does not achieve the success that United’s investment calls for – the club spent nearly £150m in the summer – and the whispers are that PSG are interested. United are keen for him to sign a new deal, but he has also talked up the prospect of managing Portugal in the past. Unlike his Spurs counterpart, he has not been setting down roots.

And therein lies the rub. Pochettino is setting himself up for the next five and 10 years, he has a vision, a project, and the support of his chairman to go and achieve it. He has overachieved thus far, willed on by the goals of Kane, but silverware surely cannot be far away.

Mourinho is, as always, living in the moment, eager to see success now, instead of building for it later. It has bitten him before, bringing an ignominious end to reigns at Chelsea, twice, and Real Madrid, and it might well bite him again.

There may not be pangs of jealousy towards Spurs at United just yet, but another implosion in the dugout would surely leave the club regretting allowing Pochettino to slip through their fingers

EPL Match of The Week: Mourinho vs Pochettino Who Fairs Better was last modified: October 27th, 2017 by Damilare Salami