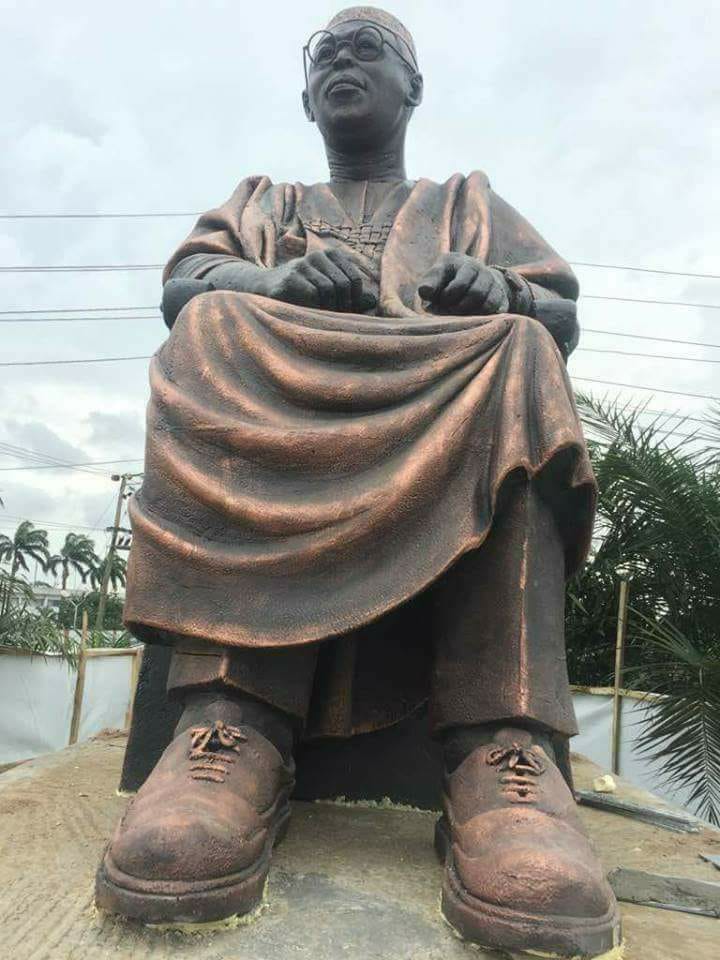 Lagos governor, Mr. Akinwunmi Ambode rarely grants interviews in the last 21/.2 years of his tenure as Governor of Lagos he has granted only a few.

Last Tuesday 26th September, the action governor of Lagos broke his silence and told City People Magazine how he runs Lagos in an interview that will hit the street on Monday 2nd October 2017.

Although the 2-hour explosive interview will be published by City People on Monday we can reveal to you authoritatively that in it he spoke about his core and respect for the late sage Awo and why his government erected the statue of Awo sitting down, instead of standing as many are used to seeing.

Ordanarily, I have always had a great respect for Pa Obafemi Awolowo. I have studied leadership in Ivy League Schools. I have learnt leadership in my day-to-day life. I see true leadership in Obafemi Awolowo. So, when I got here as Governor, I looked around and I saw that the majority of the statues that I see of him is that of a man standing up with his hands up in the air.

I didn’t understand that part of the message of leadership and the kind of values he meant to Nigeria. I feel this kind of a hero should really be found sitting down, majestically in his royal splendour, with the kind of things he has achieved. So that, he sits down and looks down on all of us.

He is a father, who sits down to watch over his children. That is what he represents. So, I tried on my own to say you know what, I am going to do would be a monument that finds him sitting down, atop 35 feet above, watching over everybody. That is what we just did today.

To recognise him, to celebrate him, to honour his dynasty, to say a big thank you to his family. And also to thank him for inspiring the likes of us and those yet unborn, and the ones who are aspiring to be public leaders, that there is a worthy institution called Awoism that prides itself in the ideals and the principles of freedom of people and the need to positively touch humanity that connects with me. And that connects with my mind of vision.

I have gone through a lot to be who I am today. My main purpose in life is to touch humanity, in any way I can do it, I will do it. Even joining politics has a sign on to death, because anything can happen, along the way.

So, if God did not take my life and I went through primaries, went through elections and I became the  Governor of this state by the mere wish of people the only thing I owe is to give them something back, I don’t want anything again. That’s why I look up to the likes of Awolowo, I look on to the likes of Asiwaju Bola Ahmed Tinubu. I will do anything to just make people happy. That’s what I am doing.

A few minutes back, you said you value the contributions of great men such as Awo and even Fela, who is being celebrated 20 years after and so on, that there are lessons.

When you study the likes of Obafemi Awolowo, he was larger than life. His vision was more about giving economic freedom and using it as a leverage for political inheritance. But today, 30 years after his death, all his ideals and aspirations are true to the core of what we are all arguing about or going about in today 2017. For instance, he said Nigeria was manufactured with the ingredients of disintegration and that only visionary leaders should rise to make sure that disintegration does not come to pass.

Who is an expert on the football field? Somebody has a skill set to be a goal keeper. Whereas there is another person called Ronaldo or Messi. They don’t have the same skill set, but they fuse together their differences, they fuse together their positive energies, and their idiosyncrasies to produce a world class team. That is what Nigeria should be. Irrespective of our idiosyncracies, we should become a world-class nation. If you are a visionary person, you can see it that this thing is workable in any organization. The same thing with a country. All you need to do is to see how to fuse all the differences to produce a fantastic product. That is what the likes of Awolowo and other political icons are saying. That is what we should pursue.