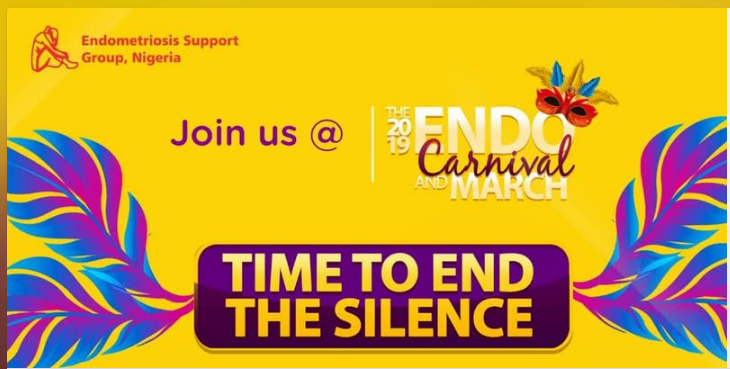 In a bid to improve on the awareness of the women affected disease, the Endometriosis Support Group of Nigeria (ESGN) has taken its awareness campaign to secondary schools in Lagos state and its environ.

Starting with the Canon James Pearse Anglican Secondary School in Yaba Lagos, a consultant gynaecologist at the Nordica Fertility Centre in Lagos, Dr (Mrs) Ifeoluwa Oyetunji who led the campaign awareness team took her time to explain in details, what endometriosis is, and is not to female pupils between the ages of 9-14.

She further stated how important it is for the campaign to get down to the grassroots stating that not less than 176 million women are infected with endometriosis worldwide.  Although it is not a communicable disease, Dr (Mrs) Oyetunji stated endometriosis leads to a high level of infertility amongst affected women.

Talking about who can be infected by this chronic disease, the Consultant Gynaecologist revealed that females between the ages of 11 and 45 who have reached the menstrual age can be infected and there is a high rate amongst those between the ages of 25 and 35. “The earlier you menstruate, the higher your chances, the fewer your circle, the higher your chances. Slim women, people with closed hymen and those with longer lasting menstrual flow stand a high risk,” she said.

Speaking with City People’s Damilare Salami, Dr (Mrs) Oyetunji revealed how to manage endometriosis. “Managing endometriosis depends on a lot of things. Firstly, the symptoms the person is exhibiting, the age of the person and the aspiration of the person fertility wise; (whether the person is ready to start a family now or later. So it could be managed with drugs (medical management) but before then, one must have observed the situation well enough for a good number of months. However, the most important factor to be considered is adequate diagnosis. The diagnosis requires the use of laparoscopy which will help in identifying the parts of the internal organs affected which will lead to the staging of the condition. The staging will help to know the kinds of treatments required.

“Of course, if the patient is interested in raising a family, or has been trying but has fertility challenges, the issue of assisted reproductive techniques come to play depending on how long the person has been waiting and the stage of the disease because, as I’ve said earlier, it’s a progressive disease and the longer it is, the more challenging it gets to conceive. But it is also a mind disease, one can still also conceive naturally depending on the stage and when one goes into treatment.”

Also at the event was the face of ESGN 2018, Miss Mistura Bello who quizzed the pupils on what they have learnt so far about endometriosis and how they intend to affect their immediate environment with the piece of information they just received.

The Program Director, Endometriosis Support Group Nigeria (ESGN), Mrs Bunmi Adeleye Ogwuche while speaking on why the ESGN decided to take the endometriosis campaign down to secondary school pupils said “we all know that endometriosis affects women of reproductive age and if you see what is going on today, you find out that girls as young as 11 years have started having menstruation; so it is good for them to know because it takes an average of 10-12 years for it to be diagnosed. So the earlier the girls know about the symptoms, the better they are able to manage it. One of the objectives of global endometriosis is to teach it in schools so that perhaps we can find the cure. Like we have heard today, endometriosis does not have a cure but we can manage it so if they know about it and the teachers are aware of it, then it is easy to deal with. When most pupils don’t go to school because of menstrual pain, it is easy to think they are lazy, some of them miss their classes, and some of them even miss their exams. So what we are trying to do is taking the campaign to schools so that we can know about the disease and the teachers are aware also so that when a pupil comes to them to say I’m having a pain, they can refer the girl-child to a doctor or advice them on what steps to take next.

Speaking on why endometriosis has not gotten the kind of attention cancer and HIV has gotten, Bunmi said “if you look at the United Nations Sustainable Development Goal (SDG) 3, it talks about the wellness of women which endometriosis is a part of. So what we are doing is trying to address SDG 3, we believe that overtime, the advocacy we are doing will be able to appeal to the ministry of health because we are currently having a national survey across 19 states in Nigeria where we are talking to secondary school girls and their teachers. We believe the result of this survey can help us further propagate this campaign through the ministry of education and health to see what can be done. We are working on it but you are very right, it is not getting the attention other diseases are getting because it is not communicable and because it’s a woman related disease, people are actually shy to come out and say I have this disease. So I believe that with time and the kind of awareness we are creating, we will be able to push for support from the ministries.

One of the participants of the event, Onuohira Chioma an SS2 pupil of Canon James Pearse Anglican Secondary School who spoke with City People expressed satisfaction at the delivery of Dr Mrs Oyetunji who according to her, came to their level to drive the message of endometriosis home. She said she will take the message to her parents and everyone around her. “I’m going home with the fact that this disease has to be talked about. It is not curable so we have to keep telling everyone.”