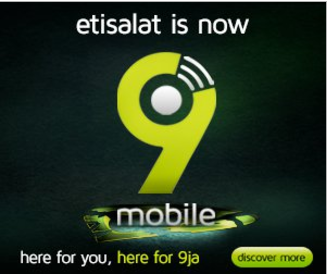 “Emerging Markets Telecommunication Services Limited (EMTS), which previously traded as ‘Etisalat Nigeria’ wishes to inform its over 20 million subscribers, government, regulatory agencies and all relevant stakeholder groups that the telecommunication company has changed its name to 9mobile as a further testament of our unwavering commitment to ensuring business continuity as Nigeria’s fourth largest telecom operator,” the company announced in a statement.

The statement signed by its Chief Executive Officer, Boye Olusanya, explained that the new trading name, 9mobile, represented the company’s “0809ja heritage,” “9ja-centricity”, and its “evolution over 9 years of operations in Nigeria.”

Mr. Olusanya said although the company’s trading name changed, it remained true to the same values it was built.

“A strong and resilient Nigerian spirit continues to reside in us, uniting us with our subscribers, confident that you will continue to believe in our new brand, which strongly reflects our innate creativity and youthfulness,” he added.

Besides, he said, the rebranding was a testament to the company’s dynamism, responsiveness and agility as a business, while leveraging the power of technology to deliver innovative products and services to meet customers’ needs.

“Our confidence in our ability to continue to make this happen is bolstered by the sheer determination, commitment and passion of our people to do more; and continue delivering excellent service.

To ensure the change of name was delivered efficiently and responsibly, the CEO said 9mobile announced plans to migrate to the new brand over the next few months.

Describing its travails as a transition, he urged its subscribers to be patient, as he reaffirmed the company’s commitment to remain a listening brand.

“We will continue to innovate, support, and empower you to do more, whether as an individual or a business,” he said.