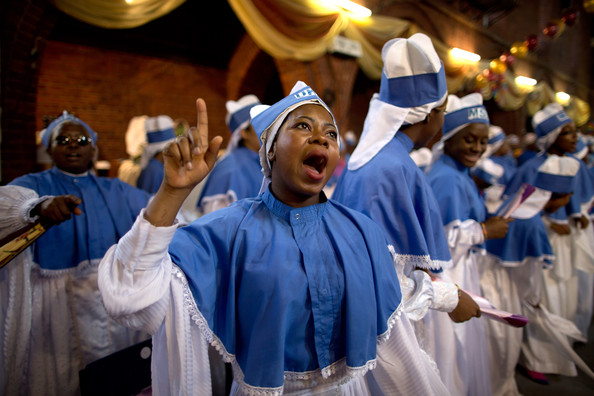 Two positive things happened to Prophet Omolaja Olorunwo, the founder of Olorunwo Cathedral Church, located at Ifako area of Gbagada in Lagos last year. One, he turned 80. Two, his C& S Church clocked 50. And he combined the 2 celebrations last December.

Around that time, Baba, who is an Owu man from Ogun State, spoke to City People Magazine about his life and concluded that everything about his life from birth has been mysterious.

He not only spoke about the circumstances of his birth, he revealed all the drama that preceded the setting up of his 50 years old church plus how  he grew in spiritual power and wisdom and was directed by the Holy Spirit to establish a C & S Church (Aladura) which he did on the 26th November, 1966 at 30, Hughes Avenue, Alagorneji, Yaba in one big sitting room. The Church was named Oke- Igbala C & S Church. He revealed how he was also directed by the Holy Spirit to stop working with Shell Company, Shell Installation, Apapa which he did in 1968 as an Architect.

Therefore, he became a Full Time Prophet of God though he had lots of tribulations as the first church he erected was pulled down after 2 years of existence.  He was later to find the church on ground after he returned from a 7 day prayer from Olorunkole Mountain in Ibadan. He was undaunted and later moved to another site at 146, Clifford Street, Alagomeji, Yaba in 1968. After this feat, he was ordained an Apostle in 1970, he became a senior Apostle in 1975, a Most Senior Apostle in 1976 and ultimately a Special Apostle in 1979. The church eventually had to vacate the new site at Clifford Street for a swampy  area at Abule-Ijesha, Basua Estate, Off Fola-Agoro Road.

During this time, the church lost many members due to the incessant relocation of the church from one location to another. However, there are a few steadfast and loyal members who remained with the church

through thick and thin till date. The name of the church was later changed to Olorunwo Cathedral Church  of C&S (Inc) in 1970 after a Church General Meeting with Late Gen. Kehinde Sho-Silver. Eventually, the present abode was developed while church activities were held at Fola Agoro, Abule Ijesha, throughout the period of construction. Since then, the church was witnessed an era of stability and progress till it come to. the “Promised Land”. The present church was completed through the Grace of God and was dedicated to the Glory of God on the 26th November, 1983. The occasion was chaired by late Bashorun M.K.O. Abiola with late Dele Giwa.

The church has grown with branches. On the same day, the founder was enthroned and ordained as Archbishop, Primate, Spiritual Father and Head of the Church by the C&S Council at a Most Solemn Ceremony which was presided over by Most Gen. Superintendent C.O.S Benson on behalf of the United C & S council

For 2 hours last December, Baba told City People Publisher, Seye Kehinde his story. Below are excerpts of the revealing interview.

You turned 80 a few months back, in August, how do you feel?

I felt happy because my condition of health is very happy. I am very, very sound in health. I don’t have any complaint in my body. Physically I am alright. I am not rich but financially.

I am alright. I am blessed with good children. I have a very, very good wife, very accommodating, very supportive. I am 80. But do I look like 80?

What is the secret of your not looking 80?

I don’t take meat. I preserve myself. I have one wife. I don’t eat outside. Neither at a party.

It is a long story. There is a lot attacked to why I don’t eat outside. There was a temptation from a certain member of the church and I don’t want that temptation to repeat itself again. I don’t take meat. I have not taken meat for over 40 years. I don’t eat Eba. I am very, very reserved. I don’t sleep outside.

I have my people around me as friends and brothers. People like ex-President Obasanjo, Gov. Ibikunle. They all support me. And I thank God for that.

When you look back at your life at 80, how does it make you feel?

Many are the afflictions of the righteous. But the Lord deliver him out of them all. I have had many tribulations but I thank God, that God almighty the God of nature, particularly in the church, in the church activities. I went through a lot in my younger age, working in the Vineyard of God.

How did you get the call to become a Minister for God?

I am an Architect by Profession. One day we were in the Church and I heard the voice that I have to leave where I am working and establish a church. I didn’t count it to be anything. Another Prophet came to deliver the message. Another Prophet came that I should resign. My Engineer, Eng. Akanbi was my Installation Engineer at Apapa. Adeogun was my installation Manager. (Call Installation) at Apapa. Then I went to him to tell him Egbon I will like to leave this job ooo. I want to become a full gospel of God. He said haa you want to be a poor man. I said not I won’t be a poor man. So I decided to leave the  place. I left the place.

Before that something terrible happened to my junior sister. She fell sick. After 7 days she could not work again. The lady died then I was told, you see what happened to her? So, I should go and resign and become a full time Prophet of God.

Then I decided to resign in 1968. the church was established in 1866. During that time, I was still working when I established the Church. I was using my salary to pay the house rent of the big parlour where we were worshipping in because there was no member I was the only member of that Church. I will open the hymn book myself. I will sing my self. When I do thanksgiving I will be the one to collect the offering. I will put down the offering myself, I will collect the offering myself. I will pay the tithe myself I will collect the tithe myself. (Laughs) As things went on, many people came. And the church continued to grow. The church started at 30 Hughes Avenue, Alagomeji, Yaba, 26th November, 1966. From Alagomeji Yaba I moved to 146 Clifford Street, Yaba.

That is the house of ex-Mayor of Lagos, Bright. From Clifford Street I moved back to my own house at 19 Olonade then to Fola Agoro. I bought the land from Bashua Family. Its in a swampy area. I built the church by the  side. Then I built my own house by the side. But I could not stay there because of the erosion. It was so terrible. I let the house out for 3 years. I used that money to buy this very land here at Gbagada.

So I put up another church here.

Thank God we are here. So, when I look back I feel happy. I need to thank God for many reasons. People of my age are not as strong as I am. Many of them are shivering when they walk. Some of them cannot perform again. I can. I can perform.

Then thing has not expired. So, I am ok. In everything of my life I thank God.

Tell us the story of your life. Where were you born? Where did you grow up?

I was born 27 August 1936, at Yobo Village, at Ifo District Council, under Abeokuta South Local Government, then. But we are now in the North now. They have divided the into 2. I was born in a village. I am a village boy. A village boy is now a big man in the town.

Is it true that before you were born there was a prediction about your birth?

Yes, there was a prediction from a soothsayer. My father was in a farm, one day, and a young man came and my paternal grand mother was there. The man was playing with sand. He told my father that look, you are going to have only one son ooo!. But the son would be a wonderful one. You are not going to name the child ooo. The child will name itself. They drove the man away. So, when the incident of the snake happened, then my paternal grandmother now remembered that one man had told her something of such that they would have a wonderful boy. Before my father married my mother, there was clash crisis between the father of my mother and my father.

The father of my mother divide wanted. My mother to many my father. It was later when they delivered me, and they told him, we have a baby boy, that they went to announce to the old man, that your daughter has delivered a baby boy, that the whole fight  had to be settled. He said well Omotilaja ni yen.

So that’s the end of the whole story. That is where my name came from Omolaja.

Then I had an encounter with a snake. Then the Prophet made the prediction. He said this man is going to be a Prophet of God. He has to join them in 1946 at the age of 10. I was born 1936. Since then I became one of the C & S members, an active members.

How did you encounter the snake?

I dipped my hands in a cricket hole at night. I was digging a cricket hole at might it was around 8.30pm or 9pm. The cricket was crying and crying. In those days, young people used to have crickets all over the place. So, I was digging that hole in other to catch the cricket. So, I put my hand inside the hole and what I touched was not cricket but a snake. The snake came out with my hand, I began to cry out. I was shivering. What is this? The thing happened very near my house. It is a dilapidated house. So, my paternal grand mother came out.

She said, what is this? Then, they called another man. They did some incantation but the snake did not leave. Then one Aladura man was near the house there. He has a church. Then, we went there to see him. Then, the man prayed. And the snake crawled away. They asked them to kill the snake, but my father and mother said they shouldn’t kill the snake because it did not harm me.

So, the snake went away.

Everything About My Life Has Been Mysterious LAGOS C & S Prophet, Primate OMOLAJA OLORUNWO was last modified: January 8th, 2017 by Reporter