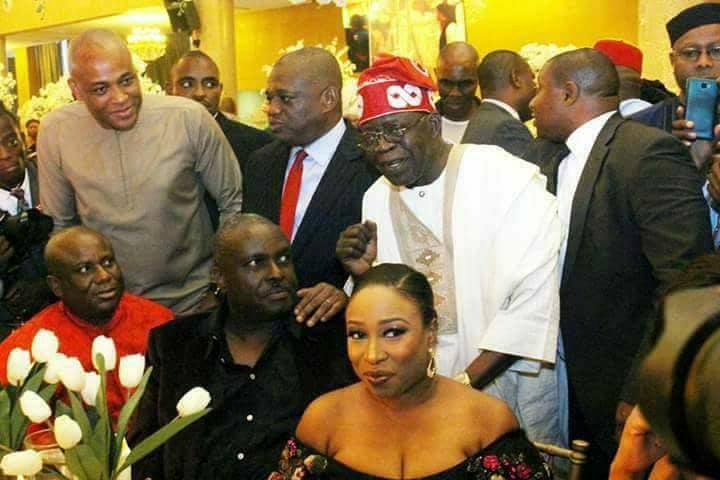 The Victoria Island axis of Lagos was filled to the brim last Thursday, 21st of December when Neya, the pretty daughter of former Abia Governor, Chief Orji Uzor Kalu, said ‘I Do’ to her beau, Lawrence Iyere in grand style. The event which paraded big wigs at the corridor of power, was one of the biggest weddings that took place this year. City People’s Assistant Society Editor, ABIOLA ORISILE, was at the star-studded wedding to serve you hot gists. Below are the gists.

As early as 12.30pm, the Catholic Church of the Assumption at Falomo in Lagos was filled to capacity with the high and Mighty in Nigeria to witness the holy solemnisation of the holy union between Ogbonneya Kingi and Lawrence Ehineya, Cardinal John Onaiyekan, the Achibishop of Abuja, Bishop Lucius Ugorji, Bishop of Umuahia, Rev. Fr. Pius Omofuwa(Parish Priest), Rev. Fr. Victor Okhira , Assistant Parish Priest and the visiting Priests, Rev Christopher Bologo and Rev.Mathew Ajuka were on hand to joined the couple. The proud father, of the bride, ex-Governor Orji Uzor Kalu, was full of smile as he walked hand in hand with his pretty daughter, Neya on her path to marital bliss. The Clergy listed many ingredients of a successful marriage. They all use different verses of the Bible to analyse importance of marriage.

The best way to describe Neya, the pretty daughter of Orji Uzor Kalu,  is ‘beauty and brain’. Tall and elegant, Neya had no hidden place on her wedding day as many guests couldn’t take their eyes off her. Neya was a cynosure, dressed in a baby nude peach flowing frock, which matched her body frame. The dress was made by Andreaiyamah Bridal Home, while Peace  O. Ibadin transformed the beautiful bride’s look. Though, her make-up by Tasalahq was simple, but it enhanced her well-wrapped hair. To say that Lawrence, the handsome groom, is lucky to find his missing rib in Neya is like stating the obvious. Those who know Neya revealed that not only is she cultured; she is also a respecter of family values. A few minutes past 5pm, she made her second appearance in a white, fully-embellished bared-shouldered dress. Her man couldn’t take his eyes off her, while the event lasted.

AND THE GROOM,  WATCHED HER BACK

The cool and handsome groom, Lawrence, looked suave in a 3-piece white-and-black suit. There is no doubt that he loves Neya to the bone marrow as he was mostly seeking her presence. City People investigation revealed that Lawrence and Neya met at Buckingham University when they were both doing their Master’s. Both have Master’s in Business Adminstration.

The highest point of affection between Neya and Lawrence during the ceremony was when the master of ceremony, Mc, Gbenga Adeyinga called Lawrence to seal his wife’s lips with kiss, he passionately did so to the admiration of many guests.

We can tell you authoritatively that the bond of love they share is so strong. Many of their guests were not surprised that they publicly displayed affection.To corroborate City People’s observation about the mutual love between the two, just before the reception, the handsome groom, Lawrence, surprised his new wife, Neya, with a black-and-white latest Range Rover (SUV). The beautiful bride was more than surprised as she sealed her husband’s lips with a passionate kiss.

The proud father of the bride, Chief Orji Uzor Kalu, was visibly happy at his daughter’s wedding. For him, it was not just about spending huge for her daughter’s wedding but making a success of it. He was on ground to usher in top dignitaries. Once his right hand man, who also doubles as his P. A. Oyewunmi, notified him of the arrival of guests Kalu’s response was prompt in attending to them. He was seen moving from table to table to greet his guests. Sighted in formal attire, he dazzled many when he was asked to dance with his daughter, Neya. He invited the APC National Leader, Senator Ahmed Tinubu and APC National Chairman, John Oyegun to join him.

You have to be new in Abia State not to know Mrs. Eunice Kalu. She is very popular as as Governor‘s mother who is not just well educated, but well loved. Fondly called ‘Oduko’ or Mother Excellency, Mama Eunice danced into the hall with her son and his wife. Mama Eunice, who is in her early 80s looked younger than her age at the wedding.

EDO, EBONYI GOVERNORS & OTHERS MADE IT

The Governor of Edo State, Godwin Obaseki, made the event. He was one of the early callers at the church in Ikoyi, while Governor of Ebonyi State, David Umahi, was fully represented by Senator Emmanuel Owen.

THE GRAND ENTRY OF ASIWAJU TINUBU

A few minutes past 4pm, APC Chieftain, Senator Bola Ahmed Tinubu, arrived at Oriental Hotel. He was welcomed at the entrance by the bride’s father, Orji Uzor Kalu. of Course, Jagaban Borgu didn’t come alone. Also, in attendance was the APC National Chairman, Chief John Oyegun. Both had no hidden place at the event as they were fully involved by the bride’s parents. They danced with bride’s parents.

SENATE PRESIDENT, WAS THE CHAIRMAN

A few minutes past 4pm, the master of ceremony, Gbenga Adeyinka, announced the arrival of Senate Presidnet, Bukola Saraki. He was spotted in a white flowing babaringa. He was the Chairman of the occasion, while Sir Dan Chukwudoqie Akudo , the chairman of Dozzy Group, was the Vice chairman of the day. Senator Saraki, in his remarks, revealed that he almost missed the wedding as he thought it was on Saturday. He told the couple not to take advice of a third party. He explained that it’s not easy to give out a daughter in marriage, saying that he has had an experience. Saraki came with Senator Francis Alemekenah (Senate Deputy Chief Whip) and Senator Philip Aduda(Senate Minority Chief Whip).

Senator Victor Edoma Egba, NDCC’s boss and his wife, Amaka, were the sponsors of the wedding.  Sponsors are an important aspect of an Igbo wedding. Their role is to advise the couple when needed. Don’t forget that Senator Edoma and his wife have been married for close to 25 years and they renewed their vows this year by marrying again at the Vatican Italy according to Catholic faith. Amaka was spotted in a special green embellished lace.

One of the super rich Lagosians, spotted at Kalu daughter’s wedding was Aare of Lagos, Chief Rasaki Akanni Okoya. He walked in with Prince Sam Adedoyin a few minutes past 4pm. They have been friends for over 50 years and they always party together. Did we tell you how they became friends over 50 years ago? They met on Lagos Island when they were both young men doing business at Idumagbo.

WHAT IS BETWEEN VANGUARD PUBLISHER

A few minutes past 6pm, the Publisher and Chairman of Vanguard, Newspapers, Mr Sam Amuka Pemu, walked into the hall. He was not alone. He came with an Ogun State ex-Governor, Chief Olusegun Osoba, former Governor of Ogun State. Let us tell you that Sam Amuka Pemu and Segun Osoba are very close. Their closeness dates back when Osoba and Pemu were young journalists at Daily Times at Kakawa Street, Lagos Island.

Pastor Chris Oyakhilome, the founder of Christ Embassy, looked suave as he came in a few minutes past 3pm. He was welcomed by the bride’s father,  Chief Orji Uzor Kalu. The bride’s dad was very happy to see him honouring his invites. The handsome pastor didnt come alone, he had 7 strong, hefty security men, who surrounded his table and prevented access to him. A few minutes past 4pm, he gave the opening prayer and blessed the couple.

The best hands in event planning were handsomely paid to cater for the large number of guests. Vintage Band supplied music. Olarenwaju, small chops, Oriental Cuisine, Exquisite Food among many others who were fully in charged.  The beautiful Oriental Hall was also transformed by Coker Events.  Popular comperes, Gbenga Adeyinka, Basketmouth, and Mc Bishop anchored the events.

Neya and Lawrence’s wedding had many side attractions and one of them was the way the couple were ushered in. They didn’t dance in with their friends; they were brought in through elevator. Another side attraction was when Tuface Idiabia perfomed many of his hit songs for the couple. Guests were dancing and taking photographs with Tubaba as Flavour was at the elevator area singing his hit songs. Flavour’s performance took the guests by suprise as they danced away with him during the party.

Though the Imperial Majesty, Oba Enitan Adeyeye Ogunwusi, the Ooni of Ife, could not make it, he was fully represented. Oba Joseph Moronfoye Okunlola Oni JP (Ejiolu IV), Onigbaye of Igbaye represented him. He brought Kabiyeesi’s good wish for the couple.