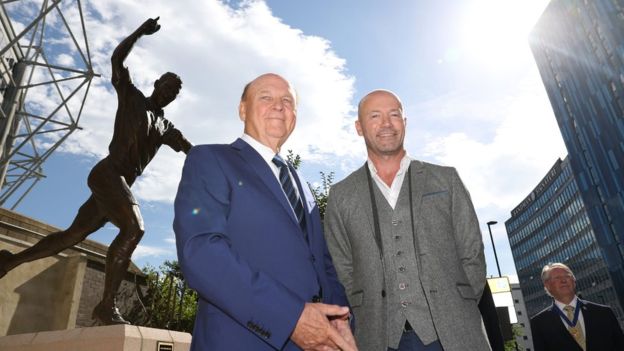 Former Newcastle United chairman Freddy Shepherd has died at the age of 75, his family, have said in a statement.
The multi-millionaire was involved in a number of regeneration projects through his company Shepherd Offshore.
He sold his stake in the club to current owner Mike Ashley in June 2007.
He was the subject of a Sunday newspaper expose in the 1990s in which he and fellow director Douglas Hall were recorded calling female football supporters “dogs”.
Reaction to this and other stories from across the North East.
The family statement said: “Freddy Shepherd, former chairman of Newcastle United and chairman of Shepherd Offshore Group and Triple S Sports & Entertainment Group, sadly passed away peacefully at his home last night.
“At this difficult time, the family have asked that their privacy be respected.”
Born and bred in the North East, Mr. Shepherd was the owner and managing director of the Shepherd Offshore Group for more than 40 years.
He set up the Triple S group in 2008 but is best known for his influential role at Newcastle United.
A director of the Magpies from 1992 until 2007, he served as vice-chairman to Sir John Hall as the club finished Premier League runners-up in both 1996 and 1997.
He also played a key role in appointing Kevin Keegan as manager and signing Alan Shearer from Blackburn for a then world-record fee of £15m.
The former Newcastle striker posted on Twitter: “So sad to hear my great friend and former @NUFC chairman Freddy Shepherd has passed away. I owe him a huge debt for bringing me home. RIP.”
Mr Shepherd’s family paid for a £250,000 statue of Shearer to be erected outside St James’ in September last year.
Newcastle City Council leader Nick Forbes said: “Freddy was an extraordinarily successful self-made millionaire who never forgot his roots in the east end of the city.
“Along with his brother Bruce he worked tirelessly to create jobs on the North Bank of the Tyne, bringing industries and skills back to life.
“He was a great entrepreneur and business leader, very forthright in his views and never shy to express an opinion, a real Geordie at heart.”