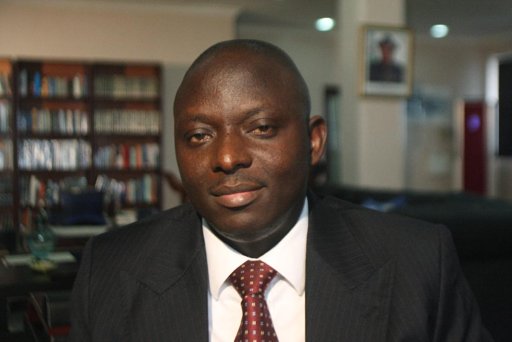 A former Director-General of the Nigerian Maritime Administration and Safety Agency, NIMASA, Patrick Akpobolokemi has been caught, in a video footage trending on the internet, threatening to slap a female journalist in the premises of the Federal High Court in Lagos.

The device of the female reporter, who was taking photographs at the court premises, was pushed away by Akpobolokemi who went ahead to warn that he would slap her.

The ex-DG is standing trial for alleged corruption. The Economic and Financial Crimes Commission, EFCC, accused him of defrauding the federal government to the tune of N795.2million.

In the undated video, Akpobolokemi is seen with one of his lawyers, and in the presence of some unidentified individuals. One of the men around him apparently drew his attention to the reporter who was trying to take some snapshots.

“Which one be this one na?” asked the man putting on a blue shirt with stripes.

“This is the premises of the court,” the reporter responded.

At this point, the former NIMASA boss moved closer to the journalist, using his right hand to block the camera as he asked: “Who are you now? Why should you just come here?”

“I am a member of the press. I can take pictures within the premises of the court,” the journalist responded.

Akpobolokemi then threatened: “I will just slap you now; I will slap you,” to which she replied: “No you cannot, sir. You cannot slap me. What’s that?”