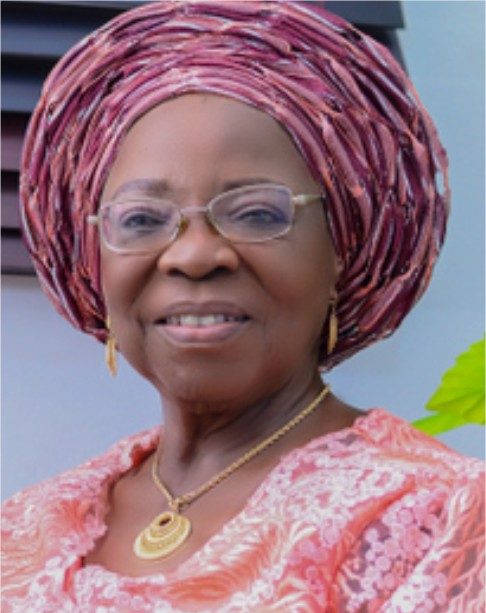 A few weeks back, Chief Mrs Olufunke Akanke Wilde, the former Principal of Remo Secondary School, RSS, Sagamu, in Ogun State clocked 80 and she marked the milestone age with a thanksgiving service at St. Paul’s Anglican Cathedral Church, Sagamu. A little reception followed afterwards. The celebrations of her 80th birthday was low key because of the situation of things in the country.

But despite the low key nature of the ceremony, a lot of her friends, colleagues, church members and those whose lives she has touched over the last 3 to 4 decades have been calling and visiting her to felicitate with this woman of great virtue, who has produced thousands of great Nigerians who are big men and women today. Don’t forget that she has been an educationist all her life. She has been a Teacher, a Vice-Principal and Principal of many schools till she retired to run her own Nursery and Primary School in Sagamu.

Over the years, she has been able to combine her role as an Educationist with her relentless commitment and service to the Anglican Church and her immediate community in Sagamu. She has also not joked with her commitment to her immediate and extended family. She is happily married to the famous Sagamu based doctor, Dr. Adesina Wilde and both have 4 accomplished children, who live abroad.

How does she feel at 80? What went through her mind the morning she turned 80, we asked her, recently. “I was really happy, because I have been looking forward to it, for quite some time”, she explained. “I have been asking God to please let me just get to that age of 80, that magic age of 80. So, I was very, very, happy when the day came. 2 months before that time, I had already sent out requests for prayers, hare and there, from my close friends and family members, asking them to pray for me, because of the experience I had. Some of my friends who had planned to celebrate their 80th birthday passed away, a few weeks before. So, I started asking for prayer requests from my friends and relations. I really felt fulfilled. God has answered my prayers”.

When she looks back at her life, what are the high points and low points? What are the things that make her happy when she looks back? “Hmmmmmm… You said when I look back. Yes, I will say God has been faithful to me because right from school, from my youth, my father didn’t want to send me to school. He had 4 girls and 5 boys. He was busy sending the boys to school. I was the 1st of the 4 girls. He refused  to send me to school because he said if you train girls they will all end up in the kitchen.”

“But I had a desire to go to school. So, the 1st thing I thank God for was that my mother was able to share my dreams with me. And so when daddy decided not to send me to school, my mum took it up.”

“The 1st thing I remembered that made me happy was that my mother was able to send me to school, for the first 4 years. It was at the last year, the 5th year, that my dad saw that my progress was good enough for him to take me up. And he did. That was one thing that gave me joy. To have had a good educational background at St. Theresa’s College, Ibadan.”

Another thing that gladdens my heart is that after even leaving St. Theresa’s College there was no hope of going for a University education. But by that time SHELL company started giving us lectures about Oil production in Nigeria. They were going around Secondary Schools, giving lectures. After some time, they said they were going to conduct examinations in all the schools, where they had given lectures. When they came to St. Theresa’s College, I was in my final year at that time. I went for the exam. I was the only one who sat for that exam because my classmates didn’t think much of it. As God will have it. I did well and Shell gave me the Scholarship to go to University. By the grace of God, I went through my University on self-scholarship and by the final year when I finished the B.A. course, the Federal Government started giving out scholarships to students. I was lucky. Shell extended my own, by one year for me to do my own postgraduate diploma in Education at the University of Ibadan.”

“That is another cause for joy. At that point, my husband was ready to marry. He had finished. I was in my final year. By the Grace of God, he gave me the type of man that suited my desires. And for the past 57 years, we have been married. Wouldn’t that be a cause for joy?

“Then, I went through difficult times, challenges health-wise. I survived that Cancer. That is Breast Cancer, I survived it. Many people were surprised I survived it. I thank God that I have a good family, that supported me. Not only my children, but my sister, and brothers. One of my sisters, Molara has a hospital in Ibadan. They call it The Molly Specialist Hospital. That was where I did the operation for the Cancer. All the treatments till the last stage were done there before I went to UCH for the last stage where all the cancerous cells were burnt out of the body.”

“I had a very good team of doctors led by Prof. Campbell. There were 5 of us in his unit. 2 died, only 3 of us survived. I was one of the 3 that survived. That called for a lot of joy for me.”

“Then, when I started working, I discovered that everywhere I worked, the Lord was with me, right from Lagos, at Auntie Ayo Comprehensive High School, to Islamic High School, Ibadan, to Fiwasaye Girls Grammar School, Akure, all these places I was enjoying the favours of God, until state creation.”

“Daddy & I were in Akure when the states were created in 1976 and by the grace of God, they said everybody, go back to your state. Daddy came back to Ogun State and I had to follow him. Anywhere he went, I made sure I went with him because of the children. I have had 4 children and I had to give them personal parental care. When he was in Lagos, he was transferred to Ibadan and I came down to Ibadan with him. Then to Akure, then to Ogun State.  When all the kids got settled I was fulfilled.”

“That was why I was happy when I turned 80. You were in church with me, you could see the joy that I had that day. I was happy Daddy was with me all the way in church and reception that day, because Daddy too had passed through a lot of health challenges, himself, which made  him retire from his medical practice.”

“Since then, God has been taking care of him. Both of us are good. And we are managing each other. And the children are looking after us.”