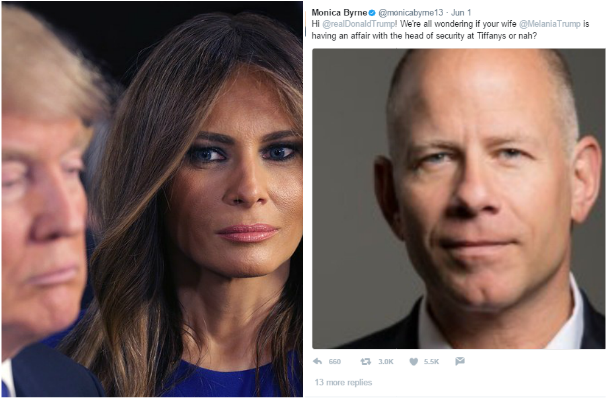 Melania and Donald Trump’s attempt at making their marriages look like a happy one may have taking a heavy hit after a writer accused her of being in an affair with Tiffany’s head of security.

The writer Monica Byrne, in recent tweets has alleged that the wife of the POTUS is having an affair and has refused to cite her source of information, The Herald reports.

Byrne’s Twitter profile reveals that she’s a novelist, artist, playwright, and activist. She’s also vehemently against the current President and all he stands for.

She made serious accusations against Melania Trump by stating that she’s been having an affair with the head of security at Tiffany’s located inside the Trump Tower lobby. A photo of the man she’s referring to was posted on her account.

Monica Byrne tweets that the real reason Melania Trump didn’t move to Washington, D.C. after the election was because of the affair.

It’s been widely reported that Mrs. Trump stayed behind in New York City so that 11-year-old Barron could finish the school year. The campaign was reportedly hard on Donald Trump’s youngest son and Melania didn’t want to make things more difficult for him by disrupting the school year.

See her tweets below, 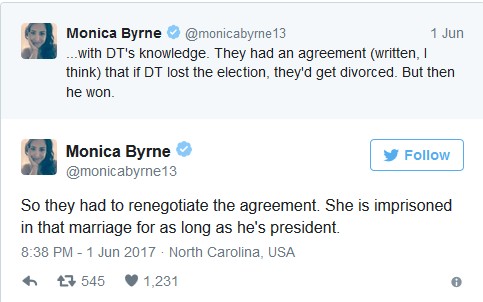 Gay People are to Blame for Hurricane...