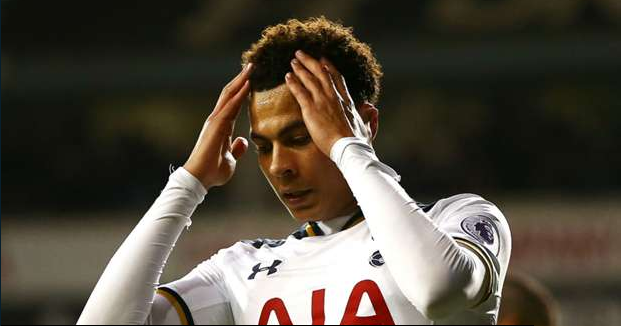 Dele Alli will miss Tottenham’s first game back following the coronavirus-enforced break after being banned by the Football Association for a video posted online mocking an Asian man for supposedly having Covid-19.

In February, Alli posted a video on Snapchat from Heathrow Airport as he waited for a flight to Dubai while wearing a face mask, seemingly suggesting an Asian man in the terminal could be infected with the virus.

The midfielder turned the camera to the man and then to a bottle of hand sanitiser, adding the caption: “The virus gunna have to be faster than that to catch me”.

The England international will miss Spurs’ Premier League clash with Manchester United, which is set to take place at the Tottenham Hotspur Stadium on the evening of Friday, June 19.

The FA confirmed on Thursday that Alli has been fined, banned for one match, and will have to undergo a re-education course.

Their statement read: “Dele Alli has been suspended for one match with immediate effect, fined £50,000 and must undertake an education course following a breach of FA Rule E3.

“The Tottenham Hotspur player denied that a social media post breached FA Rule E3(1), as it was insulting and/or improper and/or brought the game into disrepute, and constituted an “Aggravated Breach”, which is defined in FA Rule E3(2), as it included a reference, whether express or implied, to race and/or colour and/or ethnic origin and/or nationality.

“However, it was subsequently found proven by an independent Regulatory Commission.”

The FA said they accepted that Alli had not meant to be racist, however the nature of the video meant it was inevitable that people would find it offensive, and that Alli had picked on the man to film him because of a racial stereotype.

They said: “It was not the FA’s case that Dele Alli was a racist. The FA’s case was that ‘without sufficient thought’, the player shared a video that depicted an ‘unacceptable racist stereotype’ in a misguided attempt at humour.

“He was selected, argued the FA for his appearance and not because there had been any coughing. That ‘targeting’ was said to be consistent with a racial stereotyping of persons of Asian appearance being connected with coronavirus.”

In a statement on the Tottenham website, Alli apologised for the video – having previously said sorry after the initial backlash, via Chinese social media site Weibo – and said he was thankful that the FA had agreed that he had not been deliberately racist or offensive.

He said: “In response to the FA decision, I would like to apologise again for any offence caused by my behaviour. It was an extremely poorly judged joke about a virus that has now affected us more than we could ever have imagined.

“I’m grateful that the FA has confirmed that my actions were not intentionally racist because I despise racism of any kind. We all need to be mindful of the words and actions we use and how they can be perceived by others.”

Alli was previously defended by his Tottenham manager, Jose Mourinho, who had said he felt the player had shown “humility” since being criticised for the video.

“I feel that [a ban] would be unnecessary, but in relation to these decisions, I am nobody,” Mourinho said at a press conference in February.

Coronavirus Not At Its Peak Yet – President Buhari Warns