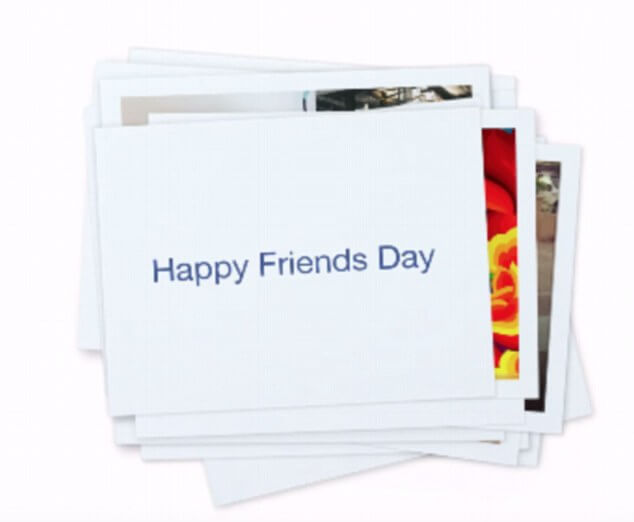 Facebook is celebrating “Friends Day” around the world, showing a video to more than a billion people. And it’s not at all clear why.

The company has celebrated the made up holiday – ostensibly to celebrate “the importance of connecting” – the last two years. But in 2015 and 2016 it was celebrated on 4 February, which Facebook said at the time was also its birthday, and comes two days after it is being celebrated this year.

It isn’t clear how the day came about, how it is intended to help its users or what it’s actually for. Facebook is celebrating by showing a video to every one of the more than a billion people who log into it each day, in which a person made up of tiny pictures of a users’ friends is shown dancing around.

The video should show up at the top of the news feed when a user logs in. But there’s also a special Friends Day page on which it can be viewed and shared.

On that page, the video can also be edited to remove friends and pictures that shouldn’t be in there.

Mark Zuckerberg announced Friends Day on 4 February, 2015, writing on Facebook that it was a “day to celebrate friends”.

“It’s also Facebook’s birthday, but today isn’t about celebrating us,” he wrote. “It’s about friendship.”

The post then went on to write about how important friends are – that they are not a distraction but give “meaning to our lives” and “make the world work”. He thanked his users for “being part of our community of friends” and called on them to “turn today into a day to celebrate a friend”.

A year later – on 4 February, 2016 – came a press release and the idea of a video, which also stitched together “special moments with your friends”. That release said that “each year we recognize this day as Friends Day and invite the world to celebrate and reflect on the importance of connecting”.

It may be partly that Facebook is encouraging the day as a way of inspiring people to share more about themselves. The company is said to be concerned about the effects of “context collapse”, where people post less and less about their own lives  – reducing the value of the service and making it harder to harvest the ad data from which it makes its money.

14 Embarrassing Things Guys Do That Girls...