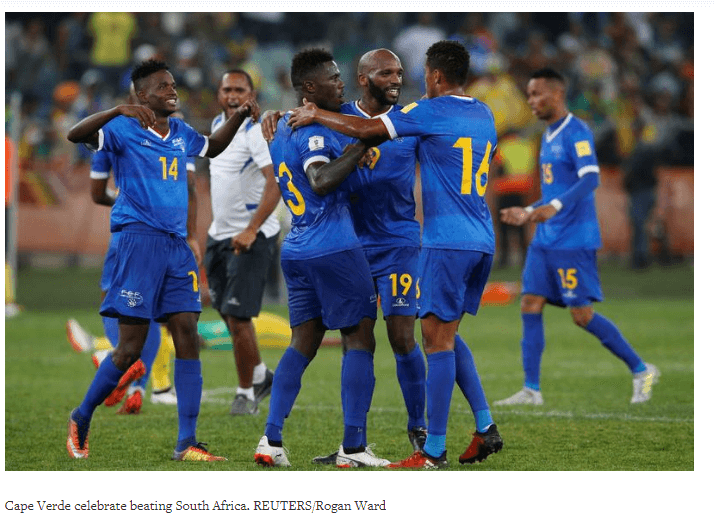 Cape Verde Islands are in contention for a shock World Cup spot with successive wins over South Africa giving them a fairytale chance to become the smallest nation to play at the finals.
The archipelago off the west coast of Africa has just over 500,000 inhabitants, making it 100 times smaller than South Africa who they beat 2-1 in Praia on Friday and even more surprisingly by the same score line in Durban on Tuesday.
The two victories took bottom side Cape Verde level with leaders Burkina Faso in Group D, offering the tantalizing prospect of World Cup qualification for the first time as they eye a place at the finals in Russia next year.
“It is the dream of every footballer to go to the World Cup. It’s the biggest tournament in the world. I dream about that and for me, nothing is impossible,” said Dutch-born Garry Rodrigues, whose long-range wonder strikes secured Tuesday’s win.
“…if you believe, if you work hard like we worked hard in these two games… it is not only about quality or how big is the country. Our dream continues and in two months we’ll see. If we work hard and if we believe… it’s like that,”
Rodrigues is one of many in the squad drawn from immigrant communities in France, the Netherlands, Portugal and the United States who have vastly strengthened the team in recent years.
Key for the Cape Verdeans is their next match at home to Senegal in Praia on Oct. 7 before they finish their qualifying campaign away to Burkina Faso in November.
It is not the first time the island nation, a former Portuguese colony, has punched above its weight.
Their 3-2 aggregate elimination of Cameroon over two legs in the 2013 African Nations Cup qualifiers saw them go to the continental championship for the first time where they continued the fairytale run by reaching the quarter-finals.