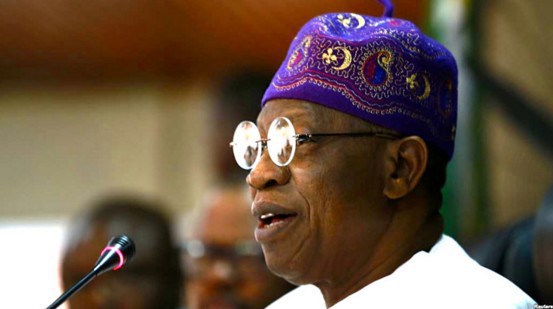 The Minister of Information and Culture, Lai Mohammed on Wednesday said fake news is a threat to the 2019 general elections.

Mohammed, who made the submissions in a presentation at The Chatham House in London, said 2019 elections would indicate whether Nigerians have learnt any lessons from the ethno-religious tension, which characterised the last general elections.
The minister said before Buhari came on board, Boko Haram was controlling territories, which were almost the size of Lebanon.

He said: “As the 2019 general elections approach, Nigeria faces a new challenge, a threat not just to the country peace and security, but indeed its very existence. It is the dual challenge of fake news and hates speech.

“Yes, the fake news problem is not unique to Nigeria, but it poses a more potent threat to the country because of it’s multi-ethnic, multi-religious and multi-cultural status. It is also a clear and present danger to the nation’s unity. Naysayers have latched onto the fake news phenomenon to exploit the country’s fault lines and inflame passion.

“For example, the British Broadcasting Corporation (BBC) recently did a report on how fake news is aggravating the persistent farmers-herders clashes. Pictures of gun-toting herdsmen from other lands are routinely used to depict the herdsmen in Nigeria. Age-long clashes between farmers and herders have suddenly been dressed in the garb of religion and ethnicity.

“Ignored is the fact that the clashes have become more persistent because of a mixture of many factors, including population explosion, effects of climate change, keener contest for dwindling natural resources and sheer criminality. Religion and ethnicity are not the reasons for these clashes.”

Mohammed explained that the Federal Government spent N2.7trillion on infrastructure in the last three and a half years.

He also said the administration of President Muhammadu Buhari has dislodged Boko Haram insurgents who no longer have the capacity to attack.

He also said the government places a premium on Nigeria’s unity by spreading projects across the nation’s six geopolitical zones.

He said: “Since coming into office, the President Muhammadu Buhari Administration has embarked on an unprecedented renewal of the nation’s infrastructure, investing an unprecedented N2.7 trillion on roads, rails, power and other similar projects.

“But it is not enough to embark on these projects, it is important to let the public know the extent and spread of such projects to foster a sense of national unity. This explains why we kick-started a nationwide tour of Federal Government projects nationwide, with not less than 25 journalists accompanying me on each trip.

“Till date, we have inspected many of such projects, including the new Lagos to Kano standard gauge rail line, the Lagos-Ibadan expressway in the Southwest that connects the port city of Lagos to other parts of the country, the new intra-city rail line connecting the Abuja city centre to the International Airport, the Enugu-Port Harcourt freeway in the Southeast and the Ilorin-Jebba-Mokwa road in central Nigeria.”

The minister said the Buhari administration remains committed to the nation’s unity.

He added: “Nigeria continues to struggle to forge a national consensus, to accept its diverse ethnic groups as the source of its national power and cohesion, irrespective of religion, status, culture and geographical location. The challenge is made more daunting by the fact that the large country is occupied by diverse people, with diverse languages and culture. In other words, it is a multi-national state, a conglomeration of ethnic nations, each with its distinctive character and ethos.

“Why is the question of national unity so important? This is simply because, without a united country, all its component parts will be working at cross purposes with conflicting signals that will constantly threaten the foundation and the very existence of the country. This is more so in a country as diverse as Nigeria, which has had sufficient doses of ethnic and religious strives at various times in its nationhood journey, including a bitter, 30-month civil war and the Boko Haram insurgency.”

My Dad Is Still Angry With Me...