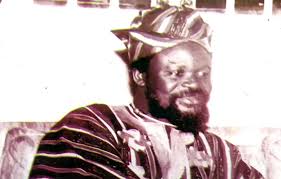 The major cities in the western part of Nigeria last week witnessed the presence of big Theatre practitioners, who turned out in big numbers to watch late Duro Ladipo’s plays, as his family members toured major Yoruba cities like Osogbo, Lagos, Ibadan with a stage play titled Ajagun Nla to celebrate the 40th anniversary of late theatre legend, Duro Ladipo, who died on March 11th, 1978 at the University College Hospital, Ibadan, Oyo State after a brief illness.

The celebration began in Osun State when the Centre for Black and International Understand under its chairman, Prince Olagunsoye Oyinlola, the former governor of the state joined the family for the celebration.

Subsequently, the 40th anniversary continued at the National Theatre, Iganmu Lagos on Wednesday 14th March 2018 where the veterans and those who trained under the late icon shared their various encounters with him in his life time. On Thursday, the following day, national theatre played host to movie practitioners, Lagos State government officials as well as fans as one of his hit stage drama, Ajagunla was acted.

The event, which was anchored by popular On Air Personality, Feyikemi Niyi Olayinka started with the introduction of guests followed by the national anthem cited in Yoruba language by a group known as “Egbe Akomolede Ti Ipinle Eko”. Shortly after, Duro’s wife and business associate Mrs Abiodun Duroladipo, better known as Moremi said the welcome speech. In her words, she implored parents to teach their kids the value of the Yoruba culture. This is because she felt that culturally, Yorubas are loosing it especially our mode of dressing these days. Though, she churned out her special performance with traditional dance before the drama begun but before then, a troupe did their cultural performance followed by Duro Ladipo’s citation.

Another cultural performance by the Lagos State troup took place before the command performance of Ajagun Nla kicked off. This stage performance lasted for almost 3 hours and those who took part in the drama includes Wole Duro Ladipo, his American based son who flew down 2 weeks ago to play the role of Ajagun Nla, and with him on stage. He played the role perfectly. Many were even carried away with his costumes and the interpretation of the role, thinking Duro Ladipo was still alive. Other cast include Muyideen Oladapo Lala, Abeni Agbon, and over 100 cast including 3 other Ladipos. After the drama, the family presented an award to the governor of Lagos State, Mr Akinwunmi Ambode and it was received by a group of people who represented him.

Those who took their time to be at the memorable event are Adebayo Salami, aka Oga Bello, Tunde Kelani, Femi Adebayo, Toyosi Adesanya, Titi Oshinowo, Kunle Afolayan, Hammed Alashe, Professor Bakare Ojo Razaq among others. On Friday 16th March, the drama continued in Ibadan before the grand finale followed at Jogor Center, on Sunday 18, March 2017.
If you must know, Duro Ladipo was born1931.

He was one of the best known and critically acclaimed Yoruba dramatists who emerged from postcolonial Africa. Writing solely in the Yoruba language, he captivated the symbolic spirit of Yoruba mythologies in his plays, which were later adapted to other media such as photography, television and cinema. His most famous play, Oba Ko So (The King did not Hang), a dramatization of the traditional Yoruba story of how Sango became the Orisha of Thunder, received international acclaim at the first Commonwealth Arts Festival in 1965 and on an European tour, where a Berlin critic, Uli Beier, compared Ladipo to Karajan. Ladipo usually acted in his own plays.

He was raised in a Christian family. His father was a minister at an Anglican Church in Osogbo. However, Ladipo may have been influenced by his grandfather, who migrated to Osogbo after the Jalumi War. His grandfather was well versed in Yoruba mythology, especially those emanating from Old Oyo, and was known to have worshipped Sango and Oya.

Ladipo tried hard and succeeded in exposing himself to traditional and Yoruba cultural elements, especially when living under the veil of a Christian home. At a young age, he would sneak out of the vicarage to watch Yoruba festivals. This fascination with his culture goaded him into researching and experimenting with theatrical drama and writing. After leaving Osogbo, he went to Ibadan, where he became a teacher. While in Ibadan he became one of the founding members of an artist club called Mbari Mbayo and became influenced by Ulli Beire.

He later replicated the club in Osogbo, and it became the premier group for promoting budding artists and dramatists in Osogbo. Throughout his career, Duro Ladipo wrote ten Yoruba folk operas combining dance, music, mime, proverbs, drumming and praise songs.

Ladipo started his personal theatre group in 1961, but he became fully established with the founding of the Mbari Mbayo Club in Osogbo. His popularity as the leader of a folk opera group rests on his three plays: Ìbamoro in 1962, Oba ko so and Oba Waja in 1964. (Oba Waja – “The King is Dead” – is based on the same historical event that inspired fellow Nigerian playwright Wole Soyinka’s Death and the king’s horseman ).

He also promoted Moremi, a play about the Yoruba ancestress of the same name. He later transformed Mbari Mbayo into a cultural center, an arts gallery and a meeting point for young artists seeking to develop their talents. Duro Ladipo, wrote quite a number of plays, such as Suru Baba Iwa” and “Tanimowo Iku.” Some of his plays were also produced for television. In fact, he created Bode Wasinmi for the Nigerian Television Authority, Ibadan. In 1977, Duro Ladipo participated in Festac ’77, second world Festival of Black and African Arts and Culture, in Lagos, Nigeria.
–

TIMI Of EDE Celebrates 10th Year On The Throne