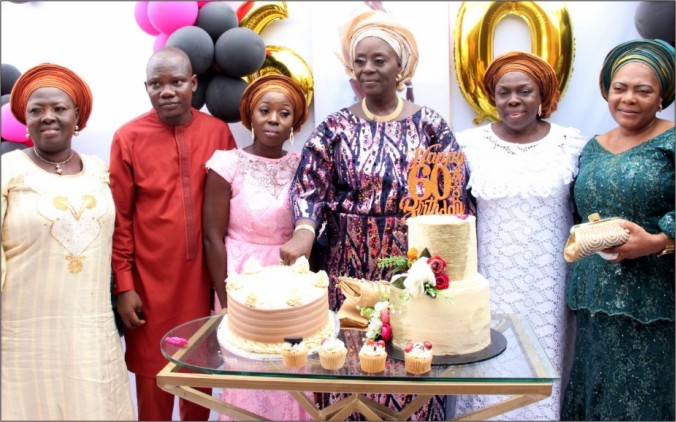 In his sermon, he also spoke about a few unique features of late Otunba Winfunke as he was said to be a philanthropist in nature.

The day was not only set aside to celebrate the remembrance of late Otunba Feyi Winfunke, but to celebrate the 60th birthday of his sister, Mrs. Ibironke Winfunke-Akiniyi. A beautiful and melodious service was held to celebrate her as members of the First African Church, Ebute-Metta came together to present he a gift. The service ended and all roads led to the Winfunke family house in Surulere, Lagos.

The reception to celebrate the remembrance of late Otunba Feyi Winfunke-Akiniyi was beautifully decorated. Guests were served in variety of food and everyone was in a bright mood as beautiful music filled the air. The two in one celebration was filled with beautiful family moment.

In his lifetime, his achievements included  the running of Lloyds Development,  Water Parks, Ikeja,  Aquatic Hotels1 31-37 Toyin Street, Ikeja. Lagos , Nigeria. The Waterparks group include a recreation and events centre based on Toyin street,  Ikeja, Lagos; He was about to set up   several resorts around the country, notably in Abuja and Lekki at time of his demise.

He died in Atlanta after a prolonged illness.He had a history of Hypertension. Hee was flown to the US by his immediate family. And he died on 18th  May 2011.

Femi Winfunke wrote:Late Otunba Feyi Winfunke was a man of many parts. He was a devoted husband, a  loving and caring father, a one-in-a million brother, an irreplaceable confidant  and a very good friend . We loveyou but God loves you best. Sleep on beloved in the bossom of your Lord and Saviour until the resurrection morning”. Femi Winfunke for the family.