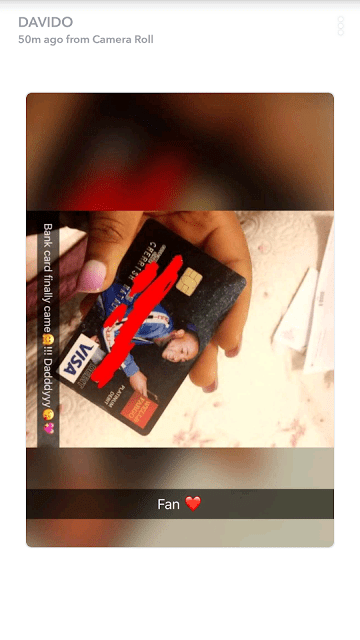 Cherrish Matadi, a staunch Davido fan, has customized her bank card with a Davido photo.

The IF crooner took to Snapchat to share a photo of the card.

From the photo, Cherrish Matadi was so excited when her bank ATM card arrived.

“SHOUT OUT AWON FANS MI!!! FOR THE LOVE OF DAVIDO! FIND THIS GUY FOR ME” wrote Davido in the caption of the picture.

Fans getting tattoos of Nigerian pop stars is slowly on the rise, in June this year, a fan of pop singer Sean Tizzle tattooed the artiste’s name on his wrist.