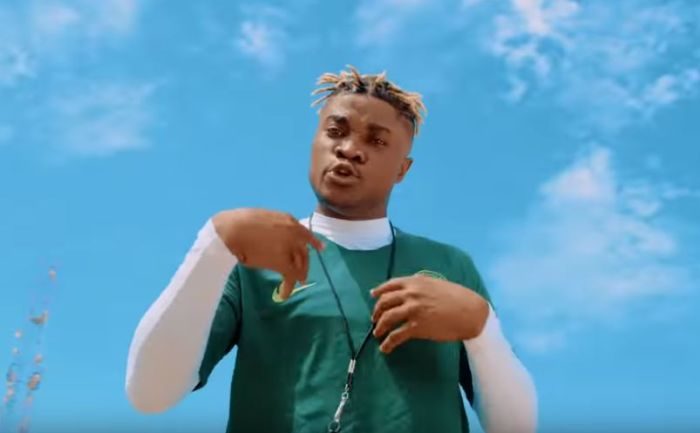 One of Naija’s hip-hop music sensation, Ojo Daniel Olaborode better known as Danny S understands the depth of the competition in the music industry and appears ready his way to the top of his game with what he described as understanding the industry and playing by the rules. He has become the toast of some established artistes after he dropped his first single “ off the light “and has since then seen his latest single “Ege” enjoy airplay within the country and outside the country.

The Ekiti state born singer who appreciates every hard working has always been ready to establish himself as far as music is concerned. He was recently interviewed by City People Entertainment Reporter, PRECIOUS POMAA, in this interview he talked about the journey so far and his aspirations as an .

Tell us about you?

My names are Ojo Daniel Olaborode, popularly known as Dannys. I am from Ekiti State but I grew up in Iju Ishaga. I represent the street. Like I always say in my songs; “all the way from Iju, awonomo shaolin temple, all the way from Iju shakushaku awon ijoba guru ma guru”.

It was actually God’s blessings. Last year cross over night , a friend of mine invited me to a church and said we should just go and celebrate the new year and I told him I had a show to attend but he still insisted I must go with him.  When we got to the church we just gave praise to God to see how the new year will turn out. Luckily, it was just few minutes to 12am. The church we attended was a Celestial Church.  Everyone was praying but some guys behind us were just laughing  and playing. So I turned to them and said” nigga gbese masun mama je kankan na candle si e lese” don’t take another man’s problem home, pray!! And everyone started shouting ah baba! You make sense oh. Immediately I left the church, I called my producer “shoker” and told him I had something I feel will be accepted by the street. So he asked me to come over the next morning and I did. I managed to put everything I have been through and the major challenges I have faced in life. I also pulled “off the light” from my first single which did fairly well in the market but the energy was not strong enough and that’s how we produced the jam and everything happened like a miracle. Right now, I can say that “nigga gbese masun mama je kankan no candle si e lese” is the highest street slang and EGE is a street anthem .

Did you know about Olamide’s interest In the song ?

Well I just woke up one morning seeing so many missed calls and messages that Olamide has posted my song and I didn’t even know anything about it. I was in shock  that he could dance to my song and post it.  Though, I talk to Olamide but not like after he supported my brand we became  family and whatever I do the whole Ybnl family support and whatever Ybnl do I single handedly support. I really appreciate Olamide for what he did because posting that video alone made over 1 million people to download it and I know how much I collect in shows to perform that song .

How far do you think Ege has taken you?

Hmmm, only if I cover my face and go out because if I go to a place where we have about 2 million people, about 1.5 million people will want to die just to touch me, (laughs). I don’t even know what people see in the song but I am sorry to say this song has traveled without visa  .

Are you working on any new project?

Yeah, I am working on a very good banger something  sweeter than anything sweet. I call it Iju shawarma. The are so many things, I have cooked them with all the required ingredients, so a lot is ready .

Where do you thinkshakushaku originated from?

The thing is , I never pray for anyone to go down because I’m going up. So whoever is leading now should keep going higher while we try to catch up and of course, I see myself bigger because I didn’t start like this. The blessings is an overdose , so in few years I promise I’ll be bigger .

What do you think the next trend will be?

We are all humans , we evolve with time and cannot predict what comes next . it could be anything but whatever it is , we will work it out.