My Father Was A Composer, Drummer & Song Writer 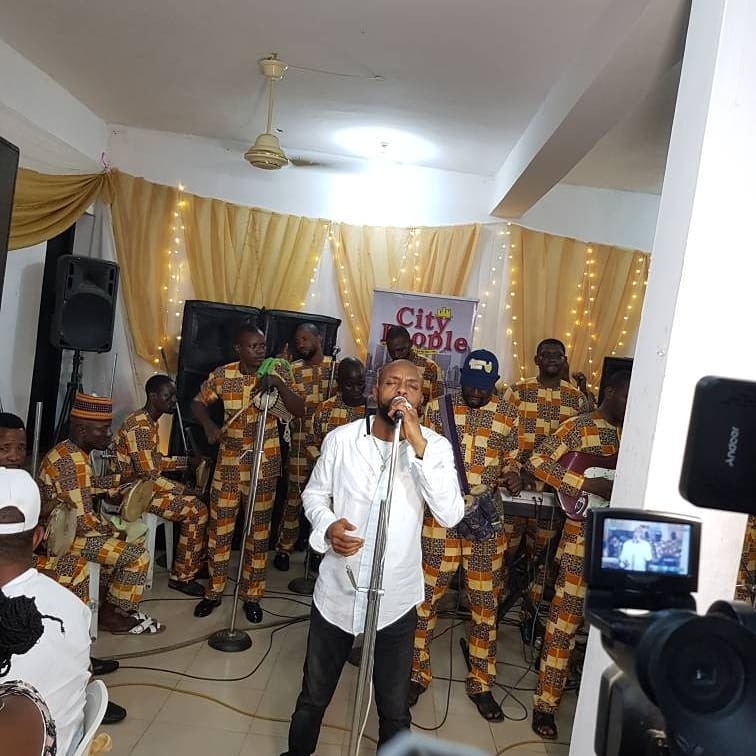 Alhaji Sulaimon Atawewe is one of the leading Fuji stars in Nigeria. He is popularly called Atawewe. A few weeks back, City People played host to him in Lagos and he thrilled his fans to a grand reception. Last week, he spoke with City People’s Publisher, SEYE KEHINDE, about his career, which has spanned more than 3 decades.

How did your music career start?

It’s been a long time. It’s more than 3 decades now. At the end of the day, I give glory to God.

How did it all start?
I started at a tender age like when I was age 4. I was in the Primary School then. When I was in Primary 1, about 6 years old. Someone invited me to a party in Ikorodu. I met Uncle Gbenga Adeboye there. He was the MC on the occasion. He then invited me for his programme at Radio Lagos.

I said haa Daddy! The man now said “sing for me, let me hear your voice. Gbenga Adeboye has said a lot about you. I was wondering what could make Gbenga invite you from school to his programme. When I sang, KSA now said ‘okay’. With what he had heard of my voice and from the way I sang, I would go places. He said I should kneel down. I knelt down and he prayed for me. Since that day I took KSA as my godfather and my mentor. He was the first artiste I would ever met in my life.

That was how it first started. He encouraged me and gave me words of advice. I listened to his advice and I said let me make it real.

Where were you born?
I was born in Idi-Oro, Mushin Local Government, but I grew up in Ikorodu. They took me to Ikorodu because my mother felt the way I was living in Mushin was not proper. I would grow up to become a bad person. That I would be tough for them to handle. So, they handed me over to my grandmum to handle. I lived with her. She was the one, who brought me up. When I wanted to start playing Fuji, she didn’t support me. She said look at you. You want to be a performer? How many herbalists do you know? How many Alfa do you know? How many spiritual fathers do you have? To become a performer is not going to be an easy task. You are going to go through a lot of challenges and stress, but I didn’t listen to her.

I kept doing what I was doing. There was no way anyone could stop me. The reason was simple. From that very day I met KSA, I knew I would succeed. I knew I was destined to succeed. The day I met KSA was the day I discovered myself and once you discover yourself, you have to make it real.

So, I didn’t listen to my grandmum. When she noticed that I was into music fully, she had to give up. She had to support me. She was my everything. She was the one I was living with. That is my grandmum. She thought me all I know in life. She told me 2 things that I need to keep as my watchwords in life. She said you need to work on the two things. She said one, whenever people want to bring down anybody and they are planning and plotting, don’t get involved.

Whenever you see anybody who is trying to become something in life, you have to support. So, those are the 2 things my grandmum told me. She said with the kind of star that you have, you are going to have problems with people. They would betray you, while they are betraying you that would pave the way to your own success. But you should not get involved in bringing down people. Support their success and see what God is going to do for you. Ever since, I have been doing that, it’s been working well for me. Things have been going smoothly.

Why did you decide to go into Fuji, why not Juju?

It’s because of my father. My father was a composer, a drummer, a song writer. He has been with the late star, Alhaji Ayinla Omowura, I was born in our house at Idi-Oro, No 4, Senate Street, while Dr. Sikiru Ayinde Barrister was living in Aileru. So, we were living together like 4 blocks away from each other, 4 buildings away to our house. I did see him. And my father was always together with him. One day, I saw my father playing with Alhaji Wahab Ilori.

He used to sing like Barrister. Funny enough, whenever I was with my dad, he always played on a turn-table records of Ayinla Omowura, I did listen to them. I also listened to King Sunny Ade. I also listened to Commander Ebenezer Obey Fabiyi. I am fully into music.

My background is music. So, when I wanted to go into music, I didn’t even think twice. I just went straight into Fuji, with the support of my grandmum. Everything I am doing today started at Ikorodu.

That was where I lived. That was where I grew up. I was living with my grandmum. That means I had every opportunity to pursue my career. When I wanted to start, she didn’t want me to go into it because she knew a lot about life. She has seen a lot. She has seen what I couldn’t even see ahead of me.

When you realised that your dad was into music, did it influence you in any way?

No. No. He didn’t want me to go into music. I remember in 1996 when I was arrested and got into trouble with the FIB at Alagbon and Adeniji Adele Annex in Lagos, my father came to see me where I was to say didn’t I tell you? I told you this job you want to go into is not an easy task.

That you will get into trouble. I am not even sure you are going to get out of this case. I said: why would you say that? I don’t even know why they arrested me. Whatever they want to bring against me I am sure I will get out of it.

I am sure I am not involved. Maybe because he was an experienced person. He knew what was involved that was why he did not want me to go through stress. Funny enough, after he left, my mother now came in when she came in I saw blood on her right leg. I said what happened mum? She said she’s trying to consult some spiritual people, and that they told her that music is not my way, it’s not my line. That I should be selling keys.

That I should go and learn how to be selling keys. I said no problem. I am going to sell keys but not as you said it. I am well known already. Where would I go and to do apprenticeship now. I am going to sell key, but it will be in a big way, in a different way. I can order them from China. It does not matter that I need to learn. I can invest my money in it. But right now, what I am doing is fetching me the kind of life I want to live and exposure that I want.

And I know that by the time this case is over and I am freed I am going to be famous more than I am now, because this case is going to give me fame and something I don’t expect. She said ok no problem. So I just touched the blood on her leg and I put the blood on my head. I said truly I am part of this blood, if this blood is my blood, if this is where I came from, I am going to make it through this entertainment industry where I am now.

And I believe, in this case if I am innocent of it I will be freed and released. And if I am not innocent I am going to go with this case. You are my mum, go and relax. Later, after 7 months, they released me. They gave me bail. The day I was released from detention, come and see a large crowd. It was as if I was coming back from America. The turn out was impressive.

That gave me the confidence that I will bounce back. Does it mean all these while when I was in detention you guys were not listening to any other artiste?

That very day in 1996 I got more confident. We walked from that place, all through Lagos Island, from one place to another.
So, after that problem, the kind of crowd that welcomed me was huge, everything about me changed. My acceptability level changed totally. That case had changed my life. It changed my popularity and I began a new life, a new beginning.

Before the case, people used to say I had a bad crowd, but after the case I started meeting with clean people, decent people, business men, the real big boys. Business changed totally after that problem. The kind of people who come to my show after that problem changed. That was how everything started changing gradually.

That was when I met my corporate affairs manager, Abiola Josiah, from there to Prince Sobaloju, that was how they started rebranding me. That was how I began performing for Golden & Edges Tone, Lekki. Sun Splash. My problem changed everything for me.

People started talking good about me. Atawewe is now a changed person. He does not have a bad crowd. It’s like everything just changed through that problem, after the police gave me bail.

How did you come up with the name Atawewe?
The name Atawewe was given to me by one of my teachers. Mr. Akato. He is a very nice man. But the problem the man had with me was that he said I was stubborn. So when there was a fight in the school, among students, the first question he would ask is: is that boy from Mushin, that Sulaimon boy, the one that is small like small pepper, the one that is small like Atawewe.
Is he involved in the fight. Once they say Yes, he would say yes I know he would be involved. This Atawewe boy is a trouble maker.

My Father Was A Composer, Drummer & Song Writer was last modified: April 2nd, 2018 by Seye Kehinde

Govt To Shut Down Apapa Bridge For Repairs