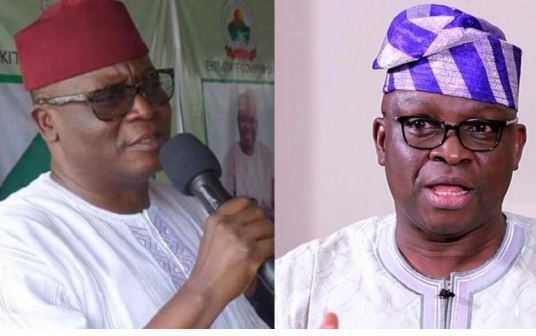 Former National Publicity Secretary of the Peoples Democratic Party, PDP, Adedayo Adeyeye, on Tuesday joined the All Progressives Congress (APC) governorship candidate in Ekiti State in the July 14 poll, Dr Kayode Fayemi, to visit Ise/Orun, Emure,Ikere and Ado Local Government Areas in continuation of his campaign visits to the 16 local governments of the state.

He described Fayose as “a greedy and selfish politician with uncanny capacity to spin reckless lies”.

He thanked Ise-Ekiti residents for their massive turnout at the rally and urged them to show the same enthusiasm on election day.

Another defector and former Ekiti State Attorney-General and Commissioner of Justice,

Ajayi Owoseni, spoke in the same vein, saying Fayose was the most ungrateful human being who loved to pay evil for good.

Fayemi told the residents that he was touched by the decrepit conditions under which Ekiti people lived in the administration of PDP, saying that APC’s administration as could be seen between 2010 and 2014 still presented the best option that could address problems of the people in the most enduring manner.

The former minister said he would continue his development policy encapsulated in his eight-point agenda, assuring that a vote for the APC is a vote for freedom and opening of new opportunities for development.

He urged residents not to be deceived by claims that he would sack teachers and local government workers, saying that he never contemplated sacking workers but was an apostle of job creation to keep a decent living.

In all the communities visited, defections swept through PDP, as the party lost hundreds of members to APC. In Ise-Ekiti, Adeyeye led other leaders to defect to APC. Among other leaders that PDP lost to APC are former Secretary to the State Government, Dr Afolabi Ojuawo; immediate past Attorney-General and Commissioner of Justice, Owoseni Ajayi, and a serving member of the House of Assembly, Ebenezer Ade Alagbada.

In Ado-Ekiti, PDP lost Fayose’s associate, who is the immediate past Special Adviser on Culture and Tourism, Ademola Bello; former elected House of Assembly member, said to have been denied his mandate by Fayose, Odunayo Arinka; former Special Adviser on Agriculture under Fayose, Bosun Osaloni; influential PDP leader, Kusi Omodara; and immediate past Chairman of Teaching Service Commission, Abiodun Falayi.

Falayi said that after 15 years of parting ways with the progressives fold, he had to leave PDP after finding out that Fayose liked to pay evil for good.

He explained that he was led by a man of God to work with Fayose because he assured that he would behave well after becoming governor again in 2014, regretting, however, that he had to leave after discovering that Fayose had gone worse in his relationship with the people.

Falayi said he felt great that his supporters who went with him to PDP are now with him in APC, even as he counselled Fayose and the PDP candidate, Olusola Eleka, not to waste time and money campaigning in Ado-Ekiti.

“Fayose has lost all the goodwill he enjoyed among the people here because of his greed, selfishness and his penchant to pay evil for good.

“Fayemi is not new to us. He is honest and humble and he represents Ekiti symbol of integrity everywhere around the world who, as we can see, is now favoured to win the election because of his records of performance and transparent manner of running government affairs,” Falayi concluded, according to a statement issued by the Director, Media and Publicity, Kayode Fayemi Campaign Organisation, Wole Olujobi.