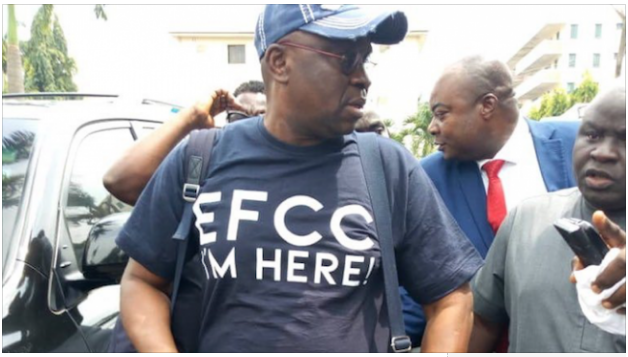 A former governor of Ekiti state, Peter Ayodele Fayose is set to regain his freedom from the custody of the Economic and Financial Crimes Commission, EFCC, as he has met his bail conditions.

According to his aide, Lere Olayinka, the former governor filed all the necessary documents before the court for verification on Friday and should be out of EFCC custody today (Monday).

A Federal High Court in Lagos presided over by Justice Mojisola Olatiregun on Wednesday granted Fayose N50 million bail and ordered him to deposit his passport with the court as part of his bail conditions.

The former governor was also asked to provide a surety who must have landed property in Lagos. The surety is also required to have three-year tax clearance in Lagos.

He was arraigned on an 11-count charge bordering on abuse of office. The EFCC had alleged that Fayose received illegal funds for his 2014 governorship campaign, among other allegations of benefitting from proceeds of money laundering.

According to the charge, on June 17, 2014, Fayose and Agbele were said to have taken possession of the sum of N1.2 billion for purposes of funding his gubernatorial election in Ekiti State which sum they reasonably ought to have known formed part of crime proceeds.

Fayose was alleged to have received a cash payment of the sum of five million dollars, (about N18 billion) from the then Minister of State for Defence, Sen. Musiliu Obanikoro, without going through any financial institution and which sum exceeded the amount allowed by law.

He was also alleged to have retained the sum of N300 million in his Zenith Bank account and took control of the aggregate sums of about N622 million which sum he ought to have known formed part of crime proceeds.

Fayose was alleged to have procured De Privateer Ltd and Still Earth Ltd, to retain in their Zenith Bank and the FCMB accounts, the aggregate sums of N851 million which they reasonably ought to have known formed part of crime proceeds.

Besides, the accused was alleged to have used the aggregate sums of about N1.6 billion to acquire properties in Lagos and Abuja, which sums he reasonably ought to have known formed part of crime proceeds.

The accused was also alleged to have used the sum of N200 million to acquire a property in Abuja in the name of his elder sister, Moji Oladeji, which sum he ought to know also forms crime proceeds.

Meet The Celebrity Matriarchs Who Are Still...