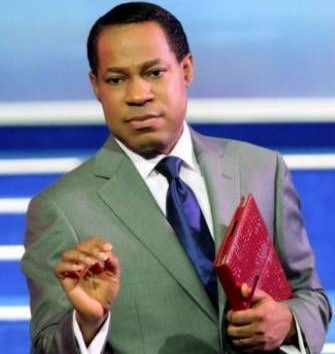 Last week, Pastor Chris Oyakhilome made a controversial comment about COVID-19 and many Pastors took him on. Hear him: “Don’t think what is happening right now has to do with a virus. It’s not a virus. The world has chosen to be deceived. As they have been deceived many times before.“This is not the pandemic. Question where did the other ones go? No one is asking. I have asked the question, ‘Where do viruses come from?’ They are not found in nature, it means they’re created. I’m trying to let you know the reason you’re in your house. I call it a global siege. “What they don’t tell you is that your body can be connected. Did you know that once that happens you can also be controlled as your devices are controlled?

Meaning that signals can be sent to your brain, your brain can be controlled. Once that happens you are no longer yourself. The idea is controlling the new race.

So since they can’t vaccinate everyone, they started vaccinating children and raising them that way. You wanna know what’s going on in the world? There’s a movie called “Divergent” from 2014. That’s what the groups that are interested in the new world order are up to, to put the vaccine in your body containing a digital ID, by which you as a human being can be controlled, you seize to be yourself.

To achieve the vaccination, they using 2 things:

They created a pandemic (Covic19) in order to create fear and panic.

They use the internet of things (IoT), and created 5G (people can easily embrace it), which causes health issues, but you wouldn’t know cause they made you love the high internet speed.

Both strategies lead to achieving their initial plan, vaccination with a digital ID.

If these groups were not hiding anything,……

They forced everyone to stay indoors (aka quarantine/lockdown), but they have people busy installing 5G connections outside. Why do they get angry when others express opposite views. They taking down their websites and posts. E.g 1. Youtube deleted many videos exposing this conspiracy, 1 by former Vodafone boss. E.G 2. Facebook deleted a post by Brazil President exposing their plans. If you still don’t yet know what is going on, know today; it’s not about the Coronavirus. This is basically a group of people serving a devilish cause trying to checkmate humanity to hell. Don’t be ignorant, either silent. This isn’t a time to seat on the fence because there is no fence. This isn’t about religion because as you can see, there isn’t one either. It boils down to two options: Life or Death. We are still in the age of the Church and the antichrist cannot advance his plans yet. The Bible is clear that after the Rapture of the Church, the son of perdition will be revealed. Brothers and sisters, this isn’t a time to play with Christianity. Give your life to Christ now while you still can because these things will happen, but after the Church is raptured”.

Pastor Matthew Ashimolowo, the Founder of Kingsway International Christian Centre countered him. He disagreed with Pastor Chris Oyakilome over claims of a link between the 5G network, Coronavirus and anti-Christ.

For the past few days, popular pastors and politicians have found a way to link the 5G network with spiritual things and Coronavirus epidemic. Oyakhilome told his members in a sermon that the 5G was part of the new world order where some figures of authority in the world were trying to build a religion, economy and government for the entire universe. Quoting Revelation Chapter 13, he said there is no need for a vaccine, adding that these are part of the Antichrist’s plan for a new world order.

However, Ashimolowo countered Oyakilome’s statement, explaining that there was no correlation between 5G and end-time signs. He warned Christians not to join Christian leaders in promoting conspiracy theories. According to him, all those claims were conspiracy theories that had nothing to do with the anti-Christ. He maintained that COVID-19 was a pandemic and must be dealt with as such.

“If coronavirus is caused by 5G, why is it in his village that does not have a 5G? “It has always been the nature of Christian leaders to plant fear in their members whenever there was going to be a major world occurrence. “The church should be more concerned about preparing their members for the Second Coming of the Lord instead of condemning a major technological breakthrough. “It’s fake news to associate 5G to coronavirus,” he said.

Sam Adeyemi, the senior pastor of the Daystar Christian Centre, in the same vein warned leaders to stop giving extreme interpretations to the Coronavirus epidemic. Adeyemi said churches, mosques, schools, and markets were also shut in 1918 during the influenza pandemic in Nigeria. Adeyemi urged leaders to use the opportunities in every crisis, and not to project extreme interpretation that causes fear to their followers.

“Some leaders are giving extreme interpretations to the crisis. I studied the last global pandemic before COVID-19 to give the right perspective. “There was a pandemic 100 years ago I read online because the interpretation that people are giving to this pandemic, they range from one extreme to the other.

“I don’t even want to go into the details now, but there’s quarrel on social media now, from 5G to 10G and other things. I decided to check, how it affects Nigeria and came across a research article by a history lecturer at the University at Birnin Kebbi.

“In 1918 September, when the influenza epidemic hit, it was sea travel that spread influenza around unlike air travel spreading Coronavirus now. “The ships brought sick people into the Lagos port. “I was shocked and screamed when I saw they closed churches, mosques, schools and markets in 1918. So, some of us now think it is the anti-Christ that is at work, he does not want us to gather together and fellowship.

“We should just be grateful to God that we have internet now and we can be relating without meeting together. They shut churches in 1918. “A leader should take a perspective like that, then calm people down and tell them there will be life after this thing,” he said. The 1918 pandemic was the Spanish flu crisis which was from January 1918 to December 1920. The flu killed about 50million people and infected about 500 million people (about a quarter of the world’s population at the time). However, Sam Adeyemi made his points on Tuesday night during a live Instagram chat with Poju Oyemade, the senior pastor of The Covenant Nation.

Fellow Pastors Take On Pastor CHRIS OYAKHILOME Over His Comment On CORONAVIRUS was last modified: April 13th, 2020 by City People