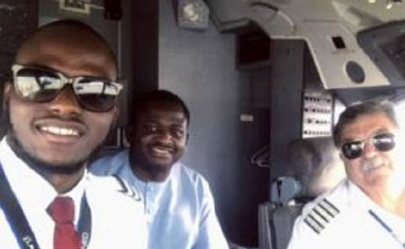 Special adviser to President Muhammadu Buhari on Media and Publicity, Mr. Femi Adesina has expressed his joy on Facebook when he was privileged yesterday to be flown from Lagos to Abuja by his own son. Femi who penned loving words on Facebook called it an extension of father’s day as he wrote;

‘FATHER AND SON IN THE COCKPIT’

On Monday, June 19, 2017, a day after Fathers Day, “I had the privilege of being flown for the first time from Lagos to Abuja by my son, Oluwatobi Adesina, who is a pilot with Arik Airline. It was truly an extension of Fathers Day, as I had the privilege of sitting in the cockpit. “Did I see anything as the Boeing 737 cruised through the azure sky? Not the foggiest thing. The wonders of our God, and of technology. To Him be all the glory”.

Femi Adeshina’s Pilot Son Takes Him On A Cruise was last modified: June 22nd, 2017 by Reporter