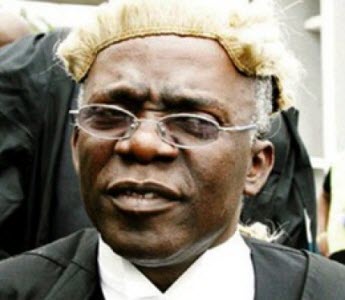 Human Rights Lawyer, Femi Falana, has announced his resignation from the editorial board of ThisDay newspaper following a story published about him in the medium.
Mr. Falana, a Senior Advocate of Nigeria, made the announcement in a statement sent to Journalists.
Full story reads:
“On Sunday, April 3, 2017, the management of Thisday newspaper claimed, without any factual basis, that I influenced the appointment of Mr. Ola Olukorede, the current Chief of Staff to Mr. Ibrahim Magu, the Acting Chairman of the Economic and Financial Crimes Commission. As the tendencious publication could not be justified, I was compelled to resign my membership of the editorial board of the newspaper.
“In a desperate bid to blackmail me, the forces of corruption who are using the newspaper to fight back proceeded to allege that Mr. Olukoyede was a lawyer in my office and that I seconded him, Mr. Olukoyede to the efcc. It was also alleged that the EFCC had given me one of the properties forfeited to the federal government by ex-governor DSP Alamiyeseigha.
“In the first place, Mr. Olukoyede has never worked in my law firm. I met him for the first time about two years ago. Having not known him or worked with him closely I could not have recommended him for any position of responsibility either in the efcc or in other public office. The second allegation is equally a figment of the fecund imagination of the fictitious writers in Thisday newspaper.
“Although the address of the property allegedly given to me by the efcc is not stated it is public knowledge that all the funds and other assets forfeited by the late governor were handed to the Bayelsa State government sometime in 2010 by the then management of the efcc. Based on my belief in public accountability, I have never said that the properties recovered by the EFCC should not be investigated.
“I therefore urge members of the public to disregard the dubious report of the reactionary elements who are hell bent on diverting the attention of Nigerians from the mega looting of our commonwealth by a coterie of plutocrats.

EFCC discovers about N.5bn hidden in a shop