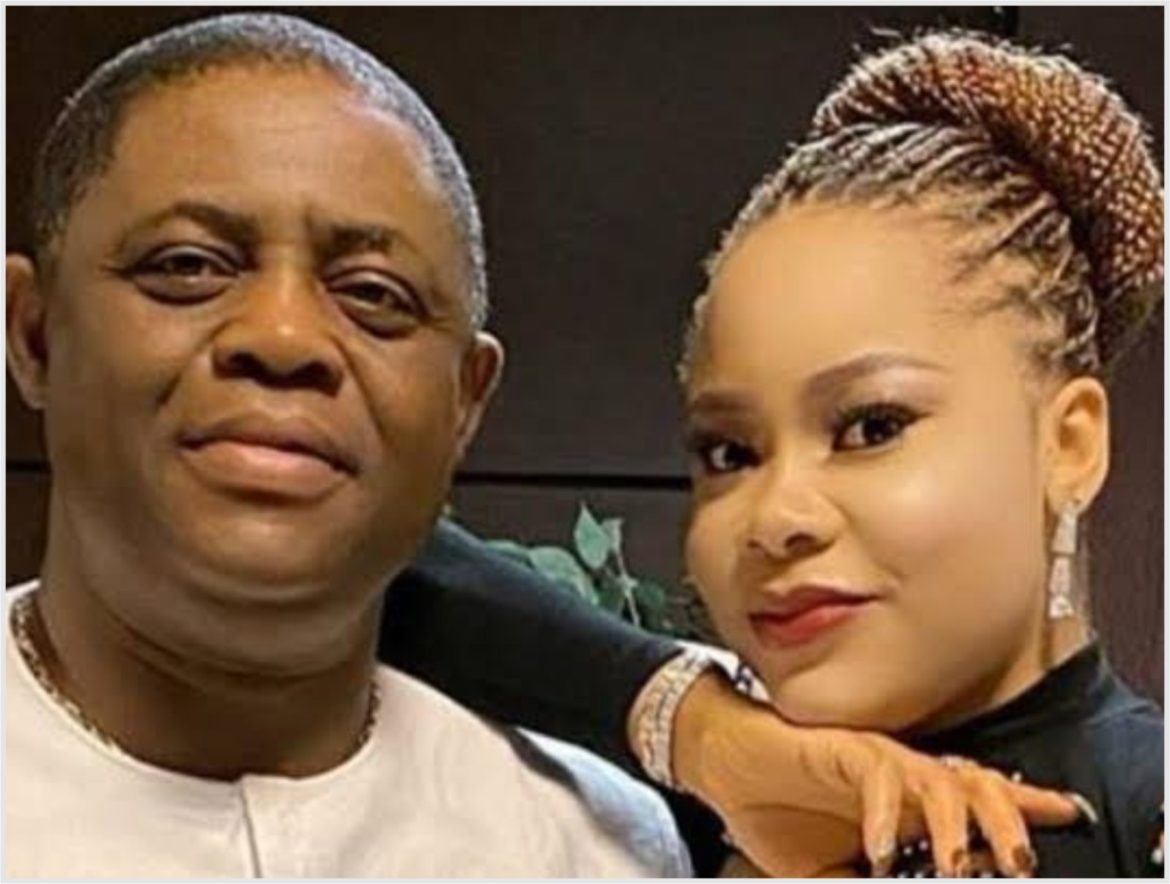 It is no longer news that the marriage of former Aviation Minister, Chief Femi Fani-Kayode to his beautiful wife, Precious Chikwendu is over. Their marriage packed up a few weeks back, when Chief Femi Fani-Kayode ended the relationship by shutting his wife out of their Abuja home. This, we gathered was a culmination of months of troubled marriage.

When the news broke a few days back, many were surprised because they saw both FFK and Precious as one happy couple. This is because whilst the marriage lasted, both were always seen in photos openly expressing love to each other.

They took lovely photos together with their 4 sons, which they posted online.

All that was until a few days back when the news broke that FFK and Precious had gone their separate ways with both looking at Divorce as the ultimate solution, revealed a source.

We hear FFK is tired of the relationship and Precious is equally tired also.

So bad did their relationship degenerate that stories of Domestic Violence began to make the rounds. Friends of Precious alleged that she was treated unfairly . But FFK has repeatedly denied that. Friends of FFK have also alleged that contrary is the case.

They allege that FFK did not treat Precious badly and that he was nice to Precious and her family members and spent heavily on her. Friends of Precious have alleged that it is FFK’s soft spot for women that crashed the marriage. They are alleging that FFK has never hidden his love for beautiful women and that it is this that heated up the crisis rocking the marriage.

The news of their marriage crash has been reported online. When the news first broke online, the issue of Domestic Violence was said to be a major factor.

Stalla Dimokokorkus in her blog raised the issue.

But an angry FFK got his Lawyers to write her a letter threatening to sue for Libel. An Abuja lawyer, Ahmed Raji, wrote Stella accusing her of defaming Chief Femi Fani-Kayode in her publication of 16th September, 2020 by alleging Domestic Violence via her online platform.

The lawyer said the publication undoubtedly portrayed FFK as a Hyprocite, wife beater, cruel and violent man. He also called Stalla’s accusations Spurious and maliciously engineered. He also frowned at Stella’s allegation that FFK took back all he gave her and seized her account. In the copy of the letter made available to City People, the lawyer wondered how a bank account which is not a tangible commodity can be seized. Of utmost concern said the letter  also is the public invitation to debates on the paternity of his sons (triplets).

In the letter, “these are innocent children who are yet to discern good from evil, but have been made to become the focus of public spectacle and ridicule.

Apart from the fact that these claims are completely false, you will agree with us that they are fair comments, by any known standard of third party expressions”.

The letter called for a Retraction of the allegations on her platform where they were published.

Kemi Olunloyo, the popular Online journalist has also revealed a lot about the issue. She has over the last few days been Tweeting. In one of her Tweets she wrote: “in all my 56 years, I have never been so passionate about 2 people who I so much care about and what has happened here… Sadly as a Journalist, I have to do my job without FAVOUR. I have to defend Media Freedom. In some of her Tweets, Kemi Olunloyo revealed a lot about FFK and Precious and what she found out about them.

She revealed for example that contrary to the allegation that FFK maltreated Precious, his wife, he supported the whole family.

She also tweeted that people should not compare Precious Fani-Kayode’s marriage to that of FFK’s first 3 wives, namely Mrs. Yemisi Wada, Saraatu and Regina who are all now in amicable terms.

Kemi has been attacked for taking a stand on the matter which seems to favour Femi. She has been called a Psychopath. Kemi has also fired back. “I will appreciate not being called a Psychopath. I am not defending FFK. I am defending Media Freedom, which they don’t like… I am here for the facts. I am defending Media Freedom. Both Femi and Precious cannot stop me. I am investigating them both. 16 hours a day, 16 sources. This is not entertainment news. It falls under celebrity news and the truth must come out… I have spoken to 16 sources and the story is shocking to the core”.

Kemi Olunloyo, also tweeted, accusing Precious of faking her own version and that it was all made up to attract sympathy as an abused wife.

According to one of her tweets, Kemi Olunloyo wrote: “Precious was in a polygamous marriage. She was fully aware of that and wanted an “open” marriage, which she made clear to her husband which he allegedly REFUSED…”

Kemi Olunloyo also revealed in one of Tweets that, “Mrs. Regina Fani-Kayode has never been physically or mentally abused by Femi. In fact they are still LEGALLY married and NOT an ex-wife. She says Femi’s weakness are the ones he loves and going through lengths to take care of them. She is the mother of Miss Remi Fani-Kayode”.

In all of these, FFK’s 3rd wife Regina has also come out to say she is still married to Femi Fani-Kayode.

A few days back, Mrs. Regina Fani-Kayode (nee Hanson-Amonoo) the 3rd wife of the former Aviation Minister, dismissed reports that her marriage to the ex-Minister has ended. In a recent statement, Regina made it clear that she is the legal wife of Femi Fani-Kayode and that they have been married for 23 years. “Chief Femi Fani-Kayode is my husband. We got married under Traditional Law and Custom in Accra, Ghana in 1997 and we got married under the Marriage Act at the Apapa Registry Office in Lagos, Nigeria in 2002”.

In the statement, Regina, defended the ex-Minister of Aviation, saying he never subjected her to any form of domestic violence in 23 years of their marriage.

She described FFK as a wonderful father and caring husband.

“We have a beautiful daughter called Oluwaremilekun” she revealed, “and both she and I are very proud of him”.

“He has been a wonderful father and caring husband and he has never subjected me to any form of domestic abuse or treated me badly. Anyone that knows Femi well knows that his greatest weaknesses are those he loves and he will do anything for them”. “He is a warm, kind, generous, gentle, intelligent and loving man who is not afraid of anything or anyone and who takes care of his own.

From the very beginning of his relationship with Precious he told me about it and I accepted it in good faith”.

Regina also enjoined the public to disregard rumours that she had parted ways with Fani-Kayode”.

Lets tell you more about his wife. Precious Chikwendu Fani-Kayode is 31. She was born 25 May 1989. She is a beauty pageant titleholder from Etti-Nanka, Anambra State. She is a Model and a Nollywood actress.

Precious is the second child of a family of seven children. She had her primary education at Makurdi International School, Benue State. She attended ECWA Secondary School, North Bank Makurdi, Benue State for her secondary school.

She graduated from the University of Calabar, Cross River State, where she obtained a Bachelor of Science (BSc) degree in Environmental Science (Forestry and Wildlife Conservation).

In 2007, Precious emerged First runner-up in the Prettiest Girl Nigeria contest and also participated in the Miss Earth Nigeria Pageant, where she finished in the Top 10.

Precious has, most recently, been the face of brands and events like Face of Safari and Face of Genisms. She has starred in numerous TV commercials, most notably Medik55 and Passions Energy Drink, both of Orange Drugs Pharmaceuticals.

She dabbled into acting in 2007. In addition to her acting career, before winning the world title, she worked at Star Advantage Company Calabar as a commercial manager.

Precious Chikwendu Fani-Kayode was voted online to represent Nigeria at Miss United Nations Pageants in Jamaica. She won the world title in June 2014.

She is the Founder and C.E.O of Glowria Snow Fashion House.

Precious and Femi have a son, Joshua Olufemi Emmanuel Lotanna Aragorn Fani-Kayode. On May 25th 2018 Precious Chikwendu Fani-Kayode was delivered of triplets (boys) at DIFF Hospital.

Chikwendu took to her Instagram page a few days back to express how glad she was by quoting from Psalm 126:1-3 to console herself.

Though she did not openly speak on the bitter separation, the Bible passages she quoted painted a picture of someone who had just been delivered from captivity.

She wrote: “When the Lord turned again the captivity of Zion, we were like them that dream.

“Then was our mouth filled with laughter, and our tongue with singing: then said they among the heathen, The Lord hath done great things for them.

“The Lord hath done great things for us; whereof we are glad.”

The marriage broke down a few months ago.

Precious has since moved out of the marital home, with the ex-minister allegedly barring her from coming to the house or seeing the four boys, including the triplets, they had together.

Fani-Kayode has not denied the separation story, except to threaten blogger Stella Dimoko Korkus, who broke the story, with libel.

Fani-Kayode and Precious Chikwendu got married in 2014.

It is his 4th marriage, with three others before having collapsed.

Fani-Kayode’s first wife was Saratu Attah, daughter of former Kwara Governor, Adamu Attah. They got married when he was 22. The marriage lasted between 1987 and 1990. They had a daughter together.

Next was his marriage in 1991 to Yemisi Olasunbo Adeniji.

She is now Yemisi Wada. She has remained. She and FFK married immediately she finished Law School.

The marriage collapsed after 3 years, with Yemisi already pregnant with the couple’s third child.

Femi Fani-Kayode has been married 4 times. His first marriage was to Saratu “Baby” Atta in 1987 and they were divorced by 1990. They have one daughter, Oluwafolake. The second marriage was to Yemisi Olasunbo Adeniji in 1991 but they were divorced by 1995. They have 3 daughters whose names are Oluwatemitope, Oluwatobiloba and Oluwatuminu. The third marriage was to Regina-Hanson Amonoo. They were married in 1997 and have one daughter, Oluwaremilekun. In 2014, Femi Fani-Kayode and Precious Chikwendu, a beauty queen and the winner of the Miss United Nations (world) beauty pageant 2014, got married elaborately. On 1 February 2016 Fani-Kayode and his wife, delivered a baby-boy, their first child.

Throughout last week City People reached out to FFK and Precious to talk about their crashed marriage but they refused. It was a No Comment response from FFK. So also from Precious Chikwendu.