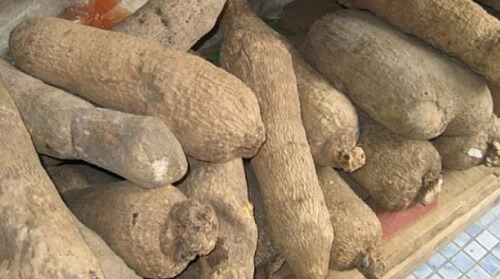 The Buhari-led Federal Government is to investigate the poor quality of consignment of yams exported from Nigeria to the United States, the Minister of Agriculture and Rural Development , Audu Ogbeh has disclosed.
According to Vanguard, Nigeria, on June 29, began to export yams to Europe and the United States, as part of moves to diversify its oil-dependent economy and earn much-needed foreign exchange.
Ogbeh flagged off the first consignment of the commodity from the Apapa port, Lagos.
The minister, who briefed State House correspondents after the weekly Federal Executive Council (FEC), which was presided over by President Muhammadu Buhari, said his ministry had been mandated to carry out the investigation.
“I have been mandated to brief on one or two developments in the agricultural sector. One, is a new development about the consignment of yams which was exported from here to the US which according to report we heard today, was found to be of poor quality.
“The ministry will investigate because the ministry is not an exporter; exporters are private sector people. We will investigate both the company that exported it and asked our quarantine department to check and find out why such a consignment left here,’’
On the assertion that the export of the consignment of yam was done in violation of the Export Prohibition Bill, which prohibits export of items like yam, Ogbeh announced that the National Assembly would soon repeal the law.
According to the minister, there is a bill before the National Assembly to repeal the law.
“It’s a law of 1989. It was passed in the belief that is only by preventing export that you can make food more available. We have a different philosophy – grow more food. So, the law will be repealed.’’
The minister also announced that the price of paddy rice would soon be affordable to ordinary citizens following a collaborative effort between the federal government, rice growers and millers.
“We are very concerned about the price of rice which is the most consumed commodity in Nigeria.
“The two have agreed to the plans we have been pursuing to arrive at a certain price which makes the price of paddy stabilize at a point where the millers can take the rice, mill it and put it in the market at competitive prices almost as low in price as the foreign rice including the smuggled ones is going for.
“That mean that in the next one month, the price of rice will become reasonable and the cost of rice would have reduced substantially.”
FG to Investigate Poor Quality of Yam Export Rejected by US – Minister of Agric, Audu Ogbeh was last modified: October 5th, 2017 by Arinze Ago