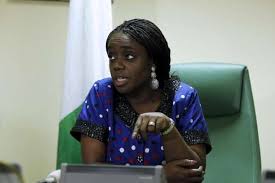 Minister of Finance Mrs. Kemi Adeosun has declared that the Voluntary Assets and Income Declaration Scheme (VAIDS) has given the Federal Government access to data of Nigerians with hidden assets.
Mrs. Adeosun made this known while speaking on Good Morning Nigeria, a Nigerian Television Authority (NTA) interview programme.

According to the minister, the ease with which people evade taxes and get away with it is no longer possible because of the huge data on property ownership.

The data, she said, were obtained from land registries, especially on properties in highbrow neighborhoods of Lagos and Abuja.

“We have cases whereby people live somewhere else other than where their properties are located. For example, you own a property in Lagos but reside in Rivers. In the past, we relied on the honesty of such person to make his asset declaration or income made therefrom. But now, we don’t have to because we have gathered data. Now, all such a person needs to do is to declare that rent earned and pay the right tax on it,” the minister said.

Mrs. Adeosun explained that through data collected, the Federal Government has detected many people whose lifestyle do not justify the tax they pay or who do not pay any at all.

She assured the citizens such people would not be prosecuted or made to pay their tax arrears if they file the proper returns and regularise their tax payment before the VAIDS deadline on March 31.

For those with assets abroad, the minister said the Automatic Exchange of Information (AEoI), to which Nigeria is signatory, will deliver data on such with or without a formal request.

“VAIDS is a very simple formula. It takes you through a process where you look at your assets and your lifestyle and if there is a disconnect, that means your tax status is irregular,” she said.

Asked about companies, the minister said: “Companies are also included. Using our data, we found, for example, lots of companies, which even got contracts from the Federal Government but didn’t declare those contracts or didn’t pay any tax on what they made. Or people who would prepare an invoice and add VAT but never remit the VAT to the FIRS. So, those are the areas of non-compliance that people are correcting through VAID Scheme,” she said.

Mrs. Adeosun also restated the determination of the Federal Government to draw the curtains on the scheme on March 31.

She warned that there will be no extension.

On the scale of compliance, the minister said many individuals and corporate entities have expressed the willingness to declare, adding that a lot of people will come forward as the deadline draws really close.

This, she said, was the experience in five of the countries where tax amnesty programmes had been implemented