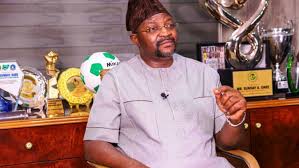 Ahead of the forthcoming 2021 Tokyo Olympics, the Federal Government on Tuesday has charged participating Nigerian athletes not to go below the six medals record set at the Atlanta 1996 Olympic Games held in the United States.

The Minister of Youth and Sports Development, Sunday Dare said this in Abuja during the inauguration of the newly constituted caretaker committees for 30 National Olympic Sports Federations.

Meanwhile he gave reasons for the devolution of the federations as a necessary action following the expiration of their tenures and the fact that the Tokyo Olympics would start in less than 90 days.

Dare said, “The caretaker committees are thus specially selected to reflect our aspirations towards podium appearances at the Tokyo Olympics.

“Nigeria has won just one medal in the last two Olympics, the 2012 Olympics in London and the 2016 Olympics in Rio de Janeiro. The medal, a bronze came in the football event and this is unacceptable to us as a nation. This is what we must all try to change.

“I believe what Nigerians want is for us to better our performance in 1996 and they should support whatever decisions we take that are geared towards achieving that benchmark of 1996 or even surpass it.

“My message to the caretaker committees is simple: This is not the time to play politics but the time towards putting Nigeria among the medal winners in Tokyo.”

FG Sets Atlanta ’96 Medals Benchmark For Athletes Ahead Of Tokyo Olympics was last modified: May 4th, 2021 by Reporter

DJ Cuppy poses with 2 puppies, says motherhood is making her a better person