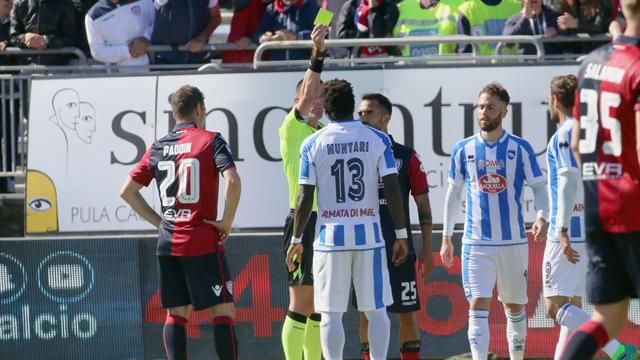 Ghanaian midfielder Sulley Muntari says he would walk off the pitch “again and again”, accusing Fifa and Uefa of not caring about racism in football.
The Pescara player, 32, was sent off after leaving the field claiming he was racially abused during a Serie A game.
In a BBC interview, the ex-Portsmouth player claims racism is “everywhere and getting worse”, and encourages players to go on strike to combat it.
“I went through hell, I was treated just like a criminal,” he said.
“I went off the field because I felt it wasn’t right for me to be on the field while I have been racially abused.”
Muntari was initially banned for one game after asking referee Daniele Minelli to stop the Italian top-flight game at Cagliari on 30 April.
The ex-Ghana international was instead booked for dissent in the 89th minute, prompting him to leave the pitch in protest, and he then received another yellow card.
He angrily confronted Cagliari fans, shouting: “This is my colour.”
Muntari had the one-match ban overturned after the Italian Football Federation (FIGC) said it had considered the “particular delicacy” of the case.
“My message is anyone who is abused should not be scared to talk, you should speak out,” added Muntari.
“You should not be scared of anybody, you are strong, you should say whatever you want to say.”
Italian football’s reputation around the world has been damaged by the incident, said FIGC anti-racism advisor Fiona May before Muntari’s suspension had been reversed.