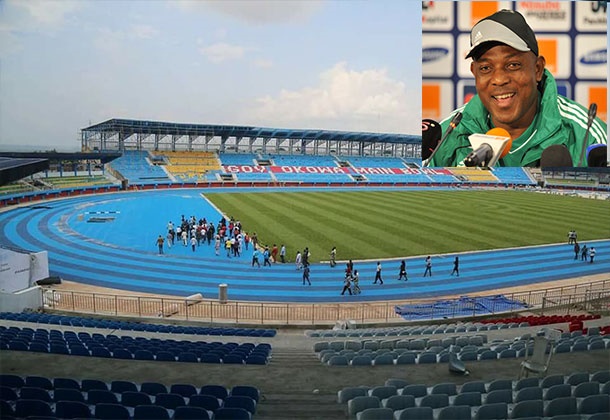 Work started at the complex about two decades ago but competing needs and focus on other infrastructure hampered continuous work at the stadium.

Asaba will today (Wednesday, July 18) join the league of state capitals with world-class stadiums as the Stephen Keshi Stadium will be officially declared open with a test run event, the Africa tour athletics meet.

Work started at the complex about two decades ago but competing needs and focus on other infrastructure hampered continuous work at the stadium.

However, the story about the Asaba Stadium named after one of the illustrious sons of Delta State, Stephen Keshi, changed the fateful day Chief Solomon Ogba and the President, Confederation of African Athletics (CAA), Hamad Kalkaba, walked into the office of the Delta State governor, Ifeanyi Okowa to present the bid for CAA Asaba 2018 Africa Senior Athletics Championships.

A statement from Olukayode Thomas, Head Media, and Publicity for CAA Asaba 2018 indicated that from the day the Delta State governor accepted the daunting challenge of hosting the 21st African Senior Athletics Championships, work started almost immediately in getting the Asaba Stadium ready.

It was redesigned, and the contractors were mobilized to the site immediately and the stadium was completed in record time.

Today’s event which will be the first sporting activity at the stadium is to test run facilities and other equipment to be used for the African Senior Athletics Championships.

Although the main work at the Stephen Keshi Stadium was done by indigenous contractors, experts from China and other parts of the world are also working with the organizers and helping on the mastery of all the world-class equipment acquired.

Nigerian elite athletes as well as their counterparts from other African countries including; Botswana, South Africa, Kenya, Gambia, Ghana, Mauritius among others will be competing in Wednesday’s Africa tour event.

Events at the Africa tour meet have been categorized into promotional, elite and classic with winners guaranteed thousands of dollars.