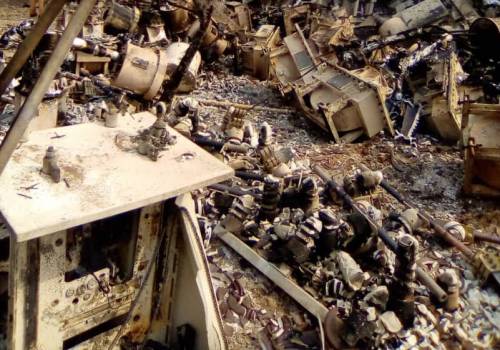 An abandoned power installation station located at Okeagbe in Akoko North-West area of Ondo State has been razed by fire.

SaharaReporters learnt that the facility, which houses huge electrical cables, power feeder, sockets, transformers among other electrical gadgets, went up in flames on Monday evening.

It was gathered that the power installation was initially planned to feed some communities in Ondo State and boundary towns of Ekiti and Kogi states.

Several residents told our correspondent on Tuesday that the facility had been abandoned for over four years.

One of the residents revealed that the power installation was being monitored by the Federal Ministry of Power before it was abandoned.

He described the inferno as a disaster, noting that the government had been beckoned upon on several times to save the situation.

He said, “The fire incident is very disheartening. We woke up to see fire everywhere in the facility on Monday with all the equipment razed.

“Government abandoned the facility at the mercy of the people in the community.”