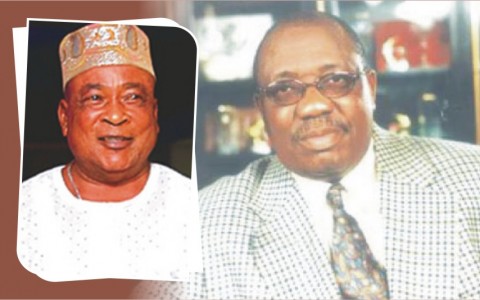 Fierce rivalries exist in the music industries in various parts of the globe and that of Nigeria is not an exception. Throughout the 1980s, one of the bitterest rivalries in the Nigerian music industry was the one between the late Alhaji Sikiru Ayinde Barrister and his fellow musician General Kollington Ayinla. This mutual hatred was so thick that in May 1982, Barrister told the world he could not eat food at the house of Mr. Kollington.

In an interview with Barrister in the tabloid Variety Entertainment, published in Ibadan, this was what ensued:

Q: What is your present relationship with Ayinla Kollington like?

Q: Don’t pull any wool over my face, my dear bros. Trying to convince me to the contrary when the whole world knows what goes on…if you are very good friends, how many times have you and Kollington exchanged visits, apart from the verbal warfare that is common knowledge. Can you eat in Kollington’s house?

Barrister: No. I can’t, why should I eat in his house.

Q: Then my point is vindicated that you are not friends.

Q: Why don’t you invite him to your house instead.

Barrister: If he will come.

Q: And you say you are friends.

Q: Then why the abusive songs against each other in records and live plays?

Barrister: I have not abused anybody in my records.

Q: And he has not abused you too?

Barrister: If Kollington thinks the only way for him to rise and make a name is to abuse me so as to sell his records, let him continue. If God had so wished that the only way for him to get recognition and followers is by abusing me, then he is on the path of his own chosen destiny. There is no need to stop him. It is a sign of progress on my own part of my music to be copied.

There is nothing wrong for any struggling Fuji musician to use my name to get recognition through abusive songs for the purpose of creating markets for his records and getting his own type of fans. It only shows their acceptance of my music as the superior one. Why then should I not be grateful to God for putting me at the top, to be copied an envied by those desperately struggling to make a name at all costs, crude or foul?

But what were they really fighting over? Well, it was a battle of supremacy. The same thing you will see between Saheed Osupa and Pasuma Wonder today, the rivalry is even taken up by their respective fans and can get bloody sometimes.

As for Barrister and Kollington, they later managed to get along. Barrister produced an album entitled No More War, with a photograph of the two competitors sitting together with a wealthy mediator throwing his arms around them. The news went viral.

Kollington also later won his fight with Salawa Abeni when the latter divorced her husband Alhaji Lateef Adepoju, then married Kollington and began recording for his label. At a concert in Ibadan in 1987, she knelt before him in a romantic gesture of supplication. As they grew older, Barrister and Kollington became closer buddies and when Barrister died at the of 62 at the St. Mary’s Hospital in London on the 16th of December 2010, one of those most hit emotionally was General Kollington Ayinla. He is still mourning his old friend, the legendary Alhaji Agba.

‘Why There Is No Constant Power Supply...

‘God is surely greater than them’, Buhari’s...