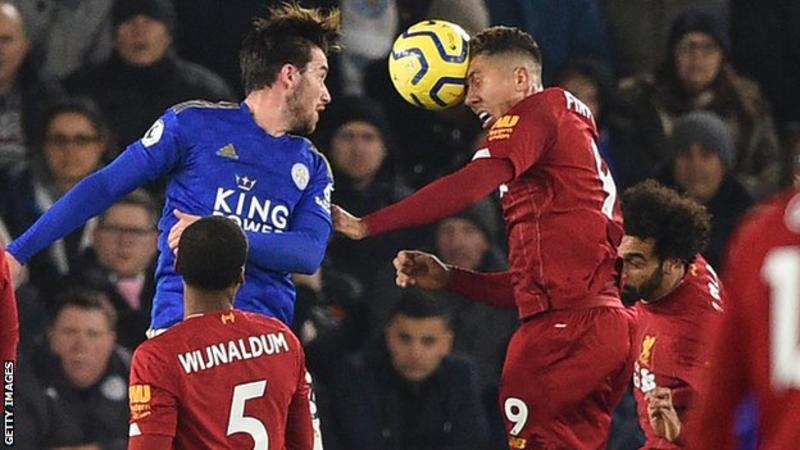 Liverpool tightened their grip on the Premier League title race even further as they produced a masterclass to overpower nearest challengers Leicester City at The King Power Stadium to extend their lead to an imposing 13 points.

Jurgen Klopp’s side started the match 10 points clear of the Foxes with a game in hand – then produced a performance of such stature and dominance it is almost impossible to see how they will not claim their first title in 30 years.

Liverpool’s slender half-time lead, courtesy of Roberto Firmino’s header from a magnificent Trent Alexander-Arnold cross, did not reflect their superiority – but they turned this into a powerful statement victory after the break.

Leicester were enjoying their best spell when Caglar Soyuncu handled in the 71st minute, and substitute James Milner scored from the spot with his first touch seconds after coming on.

Liverpool added the flourishes their magnificent display deserved when Alexander-Arnold set up another for Firmino, who scored with a cool finish, before the England defender got his own reward with a thumping right-foot angled finish.

The leaders have now dropped only two points from their first 18 games and, having lost only one league game last season, it would take a collapse of unthinkable proportions from an outstanding team to cast this huge advantage aside.

Liverpool manager Jurgen Klopp to BBC Sport: “I am happy about that. I appreciate it because I do not take it for granted and the boys have to do it every three days. We had big chances at the start of the game, did not score with them but stayed in the game and controlled it.

“It is was difficult for Leicester to get into the game, both teams felt the intensity of the season but we controlled it more and maybe Leicester were not as aggressive, maybe because of us and our positioning. We scored a first goal, super, super, cross from Trent Alexander-Arnold and Roberto Firmino can score from that situation.

“We struggled a bit with their build-up in the second half and we won the balls immediately and then scored the second goal, then the boys were flying. It looked really nice.

“1-0 is not even a result, it was a moment and it could have been difficult when they had set-piece but that is OK, I don’t expect a game like this to have a free run because they have so much quality and the season Leicester have had. We were very concentrated and the goals were absolutely nice and an important day for us.”

Leicester manager Brendan Rodgers to Match of the Day: “We played our last two games against two of arguably the best teams in the history of the Premier League.

“We didn’t have enough patience in the first half. We never secured the ball which meant we had to defend for long periods really.

“The players gave everything. It’s a great learning game for us. Credit to Liverpool they played well.

“We just didn’t have long enough periods with the ball. When you don’t against a top team – world champions – it becomes difficult for you.

“We are at the halfway point now. We are 19 games in. It is the bigger picture with these guys. We have come a long way in this period. The players have been brilliant and this is another learning game for them, they see the physicality you need to compete.

“People were trying to put us in a race with Liverpool but we know where we are.”

READ ALSO: COST OF DOING BUSINESS TO INCREASE IN NIGERIA BY 2020 – LCCI

Cost of Doing Business To Increase In Nigeria By 2020 – LCCI