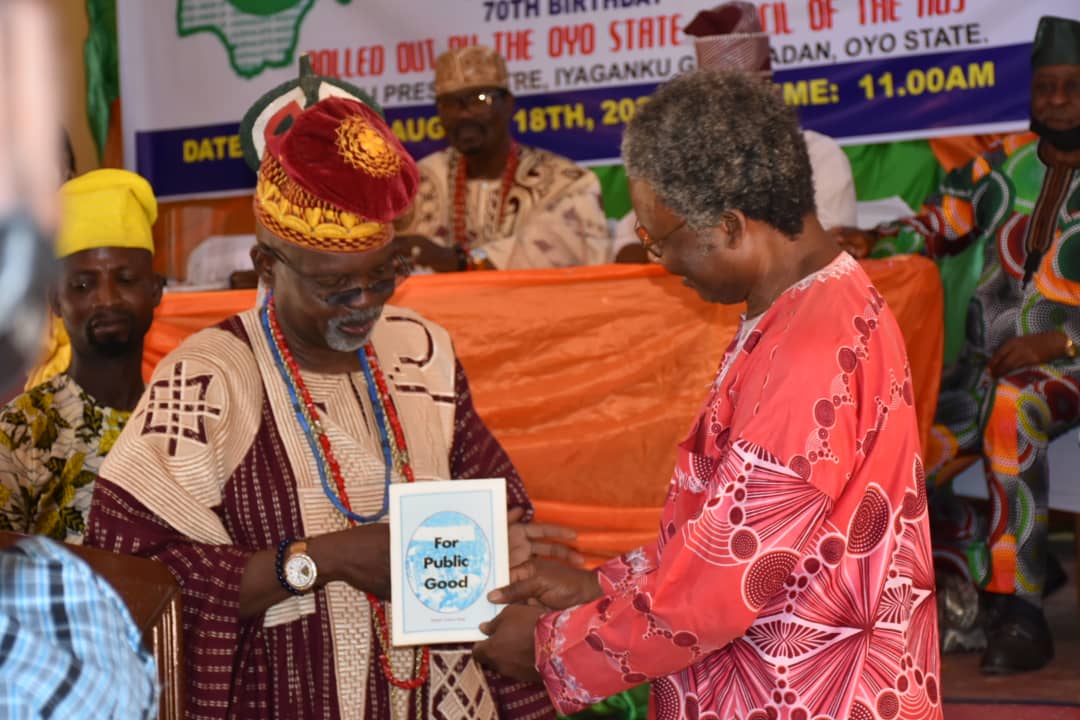 *Please, take a good note of the preponderance of the mystical figure 7,the universal figure of PERFECTION AND VICTORY,in this piece.

Above are the titles of two of my books.

The first one,”FOR PUBLIC GOOD”with the foreword written by the notable  mathematician,engineer,wit,philosopher,politician and a former Governor of old Oyo State,Dr Victor Omololu(7) Olunloyo,was published in 1994 and the second,”ALWAYS FOR PUBLIC GOOD”,was published to celebrate  my 50th birthday in 1990.

From their titles,both books are signposts of my etho – the entrenchment of an egalitarian society where every citizen will be secure,free and motivated to live happily with others.

The Chairman of the Session was veteran journalist,author,columnist and a former Managing Director of the Daily Times of Nigeria Limited,Akogun Adetola(7) Adeniyi(7).

The OYS NUJ COUNCIL gave me the liberty to invite some Special Guests to the ceremony.I chose 7 distinguished Nigerians with records of high profile public service and with whom I have personal relationships.The uniqueness about my distinguished guests dubbed :”THE GREAT 7″,was that they all have something to do with the mystical figure 7.

(2)Emeritus Professor A.B.C Nwolise(7),formerly of the University of Ibadan.He is my friend and compatriot in our successful struggle for the change of Nigeria’s DEMOCRACY DAY from the bloody and irrelevant date of May 29 to June 12,the day Nigerian voters,shunning ethnic,religious and class biases,voted the late Bashorun Moshood(7) Kashimawo Olawale(7)  Abiola,GCFR,as the President,Commander-In-Chief of Nigeria

(3)Mr Adeniyi(7)Akande,MON,former Shooting Stars FC and the Green/Super Eagles FC player/captain/coach and the first Coach of Nigeria’s FALCONS(7).He is m

(7)Oluyomi(7) Duro-Ladipo,artiste and the last born of the theatre icon.I am a Trustee of the DURO LADIPO FOUNDATION.

My relationship with the OYS COUNCIL OF THE NUJ?

46 years ago,in 1974,sequel to the confirmation of my appointment by the now-defunct SKETCH PUBLSHING COMPANY LIMITED,Ibadan,as a REPORTER/WRITER/READER GD 2, I became a member of the now-defunct Western State Council of the NUJ,the predecessor of the OYS COUNCIL OF THE NUJ.In 1982,I became a member of the old OYS NUJ EXECUTIVE COUNCIL,sequel to my election as the first Chairman of the former TELEVISION SERVICE OF OYO STATE(TSOS),now called BCOS-TV Chapel of the NUJ.And when the late Mr Joe Abiola-led EXECUTIVE COUNCIL OF THE NUJ suspended its then State Secretary  and a late Chairman of the State Correspondents Chapel,for engaging in a physical fight during a State Executive Council Meeting,I was appointed the first and only OFFICER-IN-CHARGE to run the COUNCIL affairs.

In 1984,while I was serving the second of the four(1 civilian and 3 military)Governors of old Oyo State,whom I had the privilege to be their Press Secretary,the then Lieutenant-Colonel Oladayo Popoola(now a retired Major-General),I modestly played a good part to retrieve the PRESS  CENTRE land,from the ‘jaws’ of a former old OYS CHIEF LANDS OFFICER,who had illegally appropriated half of the OYS NUJ premises to himself.

HOW TO LEGALLY RELOCATE TO CANADA, WITHOUT IELTS OR TOEFL EXAMS