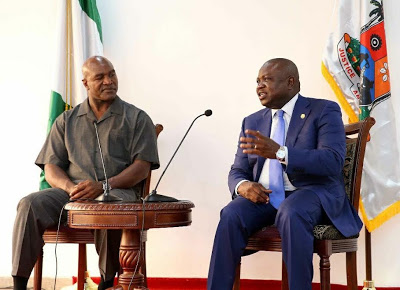 Holyfield is in Lagos for a charity rumble fight with former Lagos State Governor, Bola Tinubu at an exhibition boxing match as part of activities marking the Golden Jubilee anniversary of the state.

Welcoming him to the state, Ambode said Holyfield’s visit is historic

“This is exciting and historic moment for us coming at a time Lagos is celebrating the 50 years of its establishment and we want to say a big thank you to Holyfield for collaborating with us to put this as part of events marking the Golden Jubilee anniversary of Lagos State. We believe strongly that in all sectors that we have tried to celebrate Lagos, this is one momentous topic that we really mean to celebrate. As a government, we have always wanted to use sports as a way of driving our economy and there is no way we can showcase sports as the catalyst for economic growth than bringing somebody who is a champion; a revered person and for him to use his God given talent and resources to promote sports in our State,”he said

Responding, Holyfield said he was in Nigeria to give back to the society having achieved so much in life especially in boxing. He spoke on how he started off as a boxer. He also announced donation of $3million worth of health equipment to Lagos State Government.

“I became the person I am because I listened, I followed direction and I did not quit even when I lost. In giving back to the society, I am here to say I got a Real Deal Promotion. We are looking for young fighters who want to listen and follow instruction. This is about giving back to the society. I want kids to learn from me how I became four times heavyweight champion,”he said 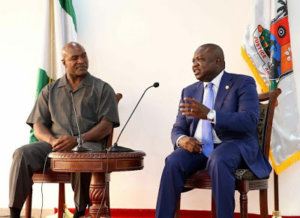 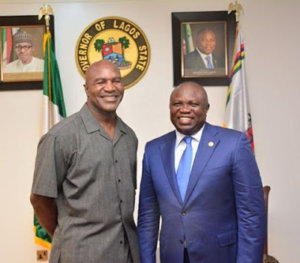