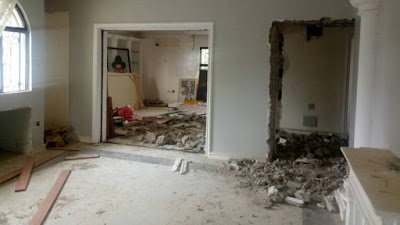 Former President Goodluck Jonathan has released a statement thanking Nigerians for showing concern to him shortly after it was reported that one of his Abuja homes have been burgled. The statement was released via his spokesman, Ikechukwu Eze. It reads thus;

“Following series of inquiries from journalists and other concerned Nigerians on the extent of the reported vandalisation and theft in the house of former President Dr. Goodluck Jonathan located in Gwarimpa, Abuja, we, therefore, would like to make the following clarifications:

The theft was discovered last month upon which a report was duly lodged with the relevant police authorities.

“The police immediately commenced investigations which led to the arrest and detention of some suspects, six of whom were policemen, even as investigations continue.

“The house, which the former President bought from CITEC estate developers in 2004, was totally stripped bare by the thieves who stole every movable item in the house, including furniture sets, beds, electronics, toilet and electrical fittings, as well as all internal doors and frames.

“However, contrary to exaggerated reports in some media, only six television sets, three refrigerators and one gas cooker were stolen. Being that the house is a modest, a 4-bedroom duplex, it couldn’t have been fitted with “36 Plasma television sets and about 25 refrigerators” as falsely reported by some media outfits.

“We thank all Nigerians for their show of concern and wish to convey the former President’s goodwill to all Nigerians.”