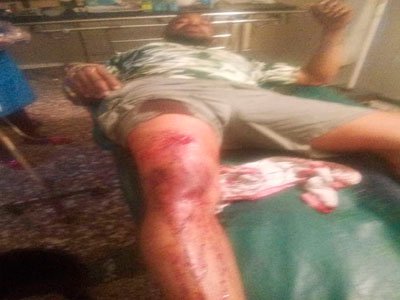 An alleged assassination attempt was on Thursday made on a former Special Assistant to Akwa Ibom State Governor Udom Emmanuel on Electoral Matters, Mfon Udeme.

Udeme, a lawyer, who resigned last month, was allegedly attacked by gunmen at his home at Itam in Uyo metropolis.

Narrating the incident, he said about 15 hoodlums invaded his home at about 1:15 am and shot him.

He said he was left in a pool of blood, while the hoodlums attacked other parts of the house.

The victim, who is recuperating in a private hospital, said he escaped after the gunmen shot him in the arm and right thigh.

He said he noticed that he was being trailed the previous night, but waited till the next day to lodge a complaint to the police.

Udeme said the suspected assassins, who rejected everything he offered them, were later repelled when a police officer in the neighbourhood shot them from his home.

The former Ibiono Ibom Local Government chairman, who has defected to the All Progressives Congress (APC), urged the police and other security agencies to look into what he described as “a fast-rising rate of politically-motivated attacks and killings.”

Asked what warranted his resignation from the government, he said: “I left because I didn’t agree with people being treated with disdain, disregard and ignominy by Governor Emmanuel. I like to be motivated wherever I work, but the governor had no motivation to offer me. So, I left because money is not everything. I stated these in my resignation letter.”

The father of five, who said he had been visited by the DPO from the ‘D ‘ Division, Itam, added that his family was terrified by the incident.

He enjoined the government to ensure citizens’ safety.

When The Nation called Police Commissioner Mr Adeyemi Ogunjemilusi and spokesman Odiko MacDon last night to confirm the incident, they did not pick their calls