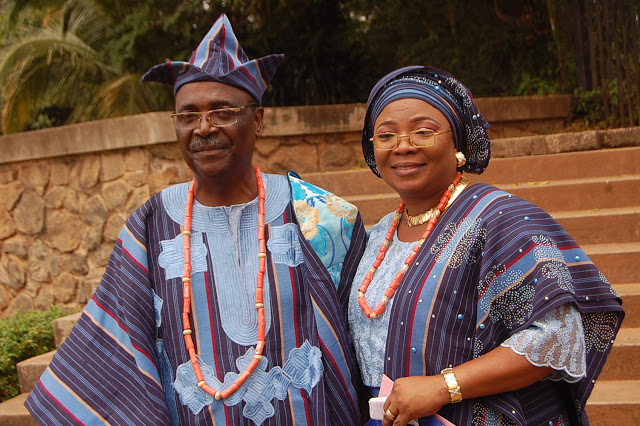 It was an impressive turnout on Sat. 4th November, 2017, as family, friends and well-wishers gathered to celebrate the goodness of God in the life of former Vice Chancellor of University of Ibadan, Professor Olufemi Bamiro on his attainment of septuagenarian age. The Ijebu-Igbo born Professor of Mechanical Engineering has every reason to thank God. At 70, he has seen it all. He is a successful academic who has reached the peak of his career. His children are successful and he has seen his grand children. Aside this, Prof. Bamiro sometime in October 2016 had a close shave with death when he was shot by some unknown gunmen. No wonder prominent personalities in their number stormed the International Conference Centre, U.I, venue of his 70th birthday party. The Professor Oristsejolomi Thomas Hall of the ICC was filled to capacity with quality, guests. This was despite the fact that it was strictly By Invitation affair. City People’s Correspondent, DARE ADENIRAN was at the party and here brings you some hot gist from the exclusively party. Read on.

To say that Prof. Olufemi Bamiro’s 70th birthday party was glamorous is like stating an obvious; the decoration, planning, entertainment of guests, services and all was just superb. The security, party vendors (strictly professionals were engaged), music etc were also in tune. Not to talk of the beautiful ushers in ‘Oleku’ style dresses with touch of White and Blues. Which also complimented the exclusively decorated hall in the same colors. In fact, entering into the hall, one do not have to be told of  personality of the celebrator, with how the venue was exclusively decorated with dummy books both on the walkways and tables. The event kicked started with Church service at Chapel Of The Resurrection University of Ibadan, Ibadan. Before guests were treated into an elaborated reception at the International Conference Centre, U.I. The party was arranged in such a way that all guests were taken care of, as there was supervisors in all the sections; food, drinks, gifts and all. They were going round the tables and made sure all went as planned. The birthday cake was also superb.

AT THE CELEBRATOR’S GRAND ENTRANCE.

After introductory session by the anchor man of the event and opening prayer said by Engr. Babatunde Lukas, the man of the day Prof. Olufemi Bamiro was accordingly welcomed into the hall alongside his immediate family with U.I anthem. Before Taiwo Omotunde and his Juju band took it up from there and played soft, danceable tunes for some minutes.

It is quite interesting to know that as academia and well exposed as Prof. Bamiro is, his favourite musician is late Apala King Aruna Ishola. In fact, it was revealed that his favourite track of Baba Ngani Agba as Aruna Ishola was fondly called in his lifetime is ‘On My Way To London Ko Sewu Rara’. This was revealed by Prof. Bamiro’s wife while speaking about her husband. One of OAB as the professor is called among his friends, Damilola Bamiro, a Computer Analyst Computer analyst, also revealed his father’s love for Squash game. Damilola and Mrs. Tope Edun, first daughter of the professor were some of children who spoke about their dad. They described as second to none Prof. Bamiro’s his humility as well as his guidance and cancelling.

ABOUT THE OPENING REMARKS

No one could have played the role of Chairman of the occasion better than the 85-year old Emeritus Professor of Linguistic, Prof. Ayo Bamgbose. Who described the celebrator as a thorough man whose integrity can stand the test of time. A leader who has also groomed many leaders, which explained people in their number came out to celebrate a man of quality character at 70.

WITH LOVE FROM MOLUSI COLLEGE.

As expected, guests list at Professor Bamiro’ 70th birthday celebration cuts across different sectors in the society and Molusi College, Ijebu-Igbo was not left out. They were there with full force to celebrate one of them, a successful and emeritus professor for that matter. The powerful delegation was led to the party by the Secretary, Molusians 61-65/67 set, Otunba Fola Akodu.

Government College Ibadan, where Prof. Bamiro did his Cambridge Higher School Certificate (Advanced Level) in 1967 and came in flying colors, was not left out of action at the party. Trust them, GCI Old Boys are colourful and always make statement wherever they find themselves. That was exactly the case at Prof. Bamiro’s birthday gig as they represented their school excellently well.

There was a minute silent in honour of Prof. Bamiro’s late wife, Mrs. Gladys Olayinka Bamiro, who died sometime in 2007, two years into Prof. Bamiro’s tenure as V.C. This was revealed by the celebrator himself while speaking at the party.

For Prof. Bamiro’s status as an emeritus professor of Mechanical Engineering, his experience and age, he has tutored several people. While many must have gained from his leadership style too. In the course of service, Prof. Bamiro must have made good number of friends too. No wonder there was high number of professor and engineers at the party. The list include Prof. Gbemi Oke, Prof. Oloyede, Prof. Francis Olukayode Bamiro, Prof. Afolabi Bamgboye, Prof. Ayo Bamgbose, Engr. Segun Kehinde, Engr. Taiwo just to mention but few out of many professors and engineers that stormed the party.

MEMBERS OF THE HIGH TABLE

Part of what makes a party unique and glamorous is quality of guests and that was not lacking at Prof. Bamiro’s birthday celebration. There were many highly respected and successful celebrities in the house. Some of these celebs were called to the special seats prepared as high table. They include the Chairman of the occasion, Prof. Ayo Bamgbose; the  Basorun of Ibadan land, Chief Kola Daisi; Chairman Splash F.M, Chief Bayo Akande; JAMB Registrar,  Prof. Oloyede, Engr. Kehinde, Engr. Taiwo and many others.

Oyo State Governor, Senator Abiola Ajimobi was among the very prominent celebrities who honoured Prof. Bamiro at the birthday celebration. Though the governor arrived towards the end but his presence sure added glamour to the party. The ‘Koseleri’ governor and the ‘Aare Atunluto’ of Ibadan land looked relaxed. He sat for close to 2 hours. Ajimobi; the Honourable Commissioner for Health, Dr. Azees Adeduntan and other aides..

THE KEHINDES WERE NOT LEFT OUT.

Engr. Segun Kehinde and his lovely wife, Molade whose daughter Oluwakemi got married to Mrs. Motunrayo Bamiro’s son some weeks back, was there to honour their in-law. Abimbola and Oluwakemi perfected their union on Friday 13th and Saturday 14th, 2017, at a well attended wedding ceremony in Lagos. Mrs. Dupe Coker, the older sister of Eng. Kehinde was there. Seye Kehinde, the amiable publisher of City People Magazine who is Engr. Segun Kehinde’s  younger brother later in the evening joined the family too. 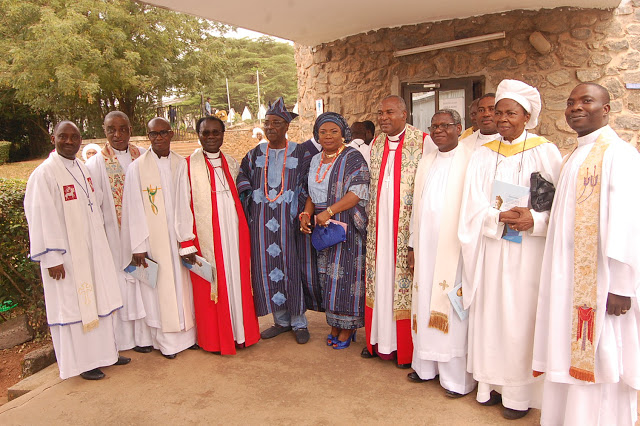 The very best hands In the event packaging and services sector were engaged for Prof. Bamiro’s 70th birthday celebration. Ripples Events and Catering Services packaged the whole event and was also the main caterer for the party. While Francis Ogiogwa’s Events Security provided security at the party. The exclusive decoration which transformed the entire hall into a small paradise was done by Dexterity Plus. Other party vendors at the party include Martha’s Kitchen. Bankyloolas Small Chops. Asley Drinks, Honey Drops, Kikkies and Rotneg Kitchen who supplied the very rich barbecued spiced fishes. D.J Lexy was on the wheel of steel.