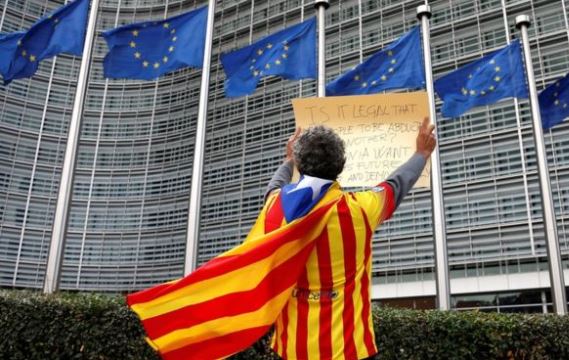 European Affairs Minister Nathalie Loiseau said the crisis following the banned 1 October referendum had to be resolved through dialogue within Spain.
Catalan President Carles Puigdemont is expected to address the regional parliament on Tuesday.
There has been no sign of a compromise being struck with Madrid. Economic pressure on the pro-independence camp is rising with three more companies expected to discuss moving their offices out of Catalonia on Monday, sources told Reuters news agency.
These are infrastructure firm Abertis, telecoms company Cellnex and property group Inmobiliaria Colonial. Major lenders Caixabank and Sabadell announced earlier that they were moving their offices out of the region.
The region of Catalonia, home to 7.5 million people in the north-east, is crucial to Spain, which is the EU’s fifth-biggest economy and a member of Nato.
In other developments:
Catalonia’s High Court asked for Spanish national police to provide extra security at the court building in the event of the Catalan parliament declaring independence; the building is currently guarded by local police
The leader of Spain’s Socialist opposition party, Pedro Sanchez, told reporters in Barcelona that his party would back government action if independence was declared unilaterally on Tuesday: “We reach out for dialogue but we’ll support the response of the rule of law in the face of any attempt to break social harmony”
A ‘great democracy’
“If there was a declaration of independence, it would not be recognised,” Ms Loiseau told French broadcaster CNews (video in French).
“The first consequence would be its exit from the European Union.”
“Obviously,” she added, “there is more to Catalonia than the consultation organised by the independence movement…
“This crisis needs to be resolved through dialogue at all levels of Spanish politics.”
Casting doubt on the validity of the vote, she described Spain as a “great democracy” and pointed to the “particularly” high level of devolution its regions already enjoyed.
However, Catalans have long been calling for more say in spending, higher status for their language and recognition that they are a nation distinct from Spain.
All eyes on Puigdemont
Catalonia’s parliament had been due to meet on Monday with the expectation that it would endorse the declaration of independence, based on the majority Yes vote on 1 October.
However, the session was blocked by the Spanish Constitutional Court, which had likewise sought to stop the referendum itself.
Speculation is intense as to what Mr Puigdemont may say when he addresses the parliament in Barcelona on Tuesday evening. He could ask the parliament to declare independence on the basis of the referendum law it passed last month, which in turn could lead the Spanish government of Prime Minister Mariano Rajoy to suspend devolution, acting under Article 155 of the constitution.
The BBC understands that whatever Mr Puigdemont says, his statement will trigger the 48-hour period within which MPs need to declare independence, according to the Catalan law.
It is also understood the Catalan leadership has already decided on the way forward.
An MP from Mr Puigdemont’s party told the BBC on Sunday that the current plan was to stop short of declaring independence unilaterally and make a “symbolic statement” instead.
Final results from the referendum suggest 43% of Catalan voters turned out and 90% of them backed independence – but “No” voters largely boycotted the ballot.
At least 350,000 people joined a unionist rally in Barcelona on Sunday, after recent massive rallies by separatists and democracy activists in the city.
The crisis has been largely peaceful, although some 900 civilians and 33 police officers were hurt on referendum day when police sought to stop the vote at some polling stations by force.
France Rejects Catalan Independence was last modified: October 9th, 2017 by Arinze Ago