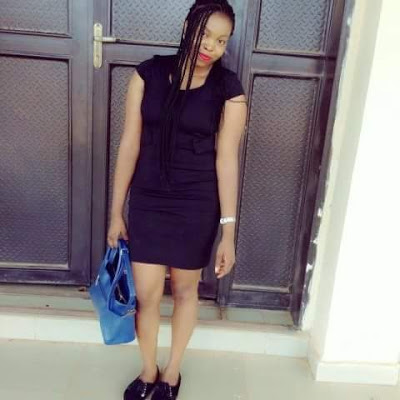 Joy has been cut short in the household of Mr. Anthony Ude in Lagos, following the death of his daughter, Miss Chinenye Roseline Ude.

The lady was killed last week just before she was to pick up her call-up letter to participate in the mandatory National Youth Service Corps (NYSC) scheme.

As it is, Ude, who hails from Ugbo-Okpala in Awgu Local Government Area of Enugu State, is being buffeted by pain and agony. He can’t believe his fate just as he can’t understand how his daughter was killed after he had invested enormously to see her through school.

Chinenye lost her life in a fatal accident at Akesan Junction in Igando area, along the Isheri-LASU Road, Lagos. Chinenye, 24, was a graduate of Sociology from Enugu State University of Science and Technology (ESUT) and was due for the NYSC programme in October, 2017.

The lady met her untimely death as she went with her father, who had an injury on his hand to the nearby Divine Blessing Hospital, across the Isheri-LASU Road, in Akesan village, for treatment.

It was gathered that while the duo waited for a chance to cross to the opposite side of the expressway, she was unaware that a Mercedez tipper lorry, with registration EPE 299 XE, loaded with sand, was coming from the LASU end. It was learned that the driver of the vehicle lost control of the wheel and headed for the side of the road where Mr. Ude and his daughter stood.

When Ude and his daughter realised the grave danger confronting them, they fled in different directions. But as fate would have it, the vehicle went after Chinenye, killing her instantly.

According to a witness, the vehicle’s rear tyres crushed Chinenye’s head on the paved road. Bystanders wept uncontrollably at seeing the contents of her skull splashed everywhere.

“The pathetic incident instantly attracted a huge crowd of sympathisers and passers-by. People could not restrain their tears,” one witness said.
Daily Sun gathered that soon after the accident, the police at Igando were alerted. On arrival, they inspected the scene and conducted short investigation before arranging for an ambulance to take the body away.

The tipper driver and the deceased’s father, according another eyewitness, Mr. Azuka Obidinnu, were taken to Igando Police Station while the tipper was impounded.

After a brief stay at the station, a policeman, Sergeant Onee Kanu, and Mr. Obidinnu, conveyed the remains of the deceased to the mortuary of Mainland Hospital, Yaba, where it was deposited.

Meanwhile, the driver of the tipper lorry is being detained at Igando Police Station pending the outcome of investigations.

The father of the deceased, Mr Ude, who resides at Akesan, was evidently distraught. He regretted the tragic death of his daughter at her prime age. “I thank God for sparing my life and making my escape possible.
“If two of us had died, the situation could have been both colossal and disastrous. I pray God to give my wife, Mrs. Amaka Ude, the fortitude to bear this huge loss. It is heavy on her; she is experiencing immense sorrow and sadness at the moment. I can feel her pain and anguish because this loss is irreparable,” he said.

In the meantime, Daily Sun has been told about an on-going meeting between the police, the Udes, relatives of the tipper driver and the association of tipper owners on how to resolve the tension amicably and get the matter out from the police.

The meeting, it was learned, focused on how to pay compensation following the death of Chinenye. The compensation would help the family in taking care of her burial expenses.

It was disclosed that the family of the deceased was yet to know the owner of the tipper lorry as he was said to be out of Lagos when the accident occurred. But the association of tipper owners was said to have pledged to stand by the driver of the tipper lorry who killed Chinenye, promising to assist him in the payment of the financial compensation being demanded by the family

Fresh graduate of ESUT crushed to death by tipper while taking her father to hospital was last modified: August 21st, 2017 by Reporter