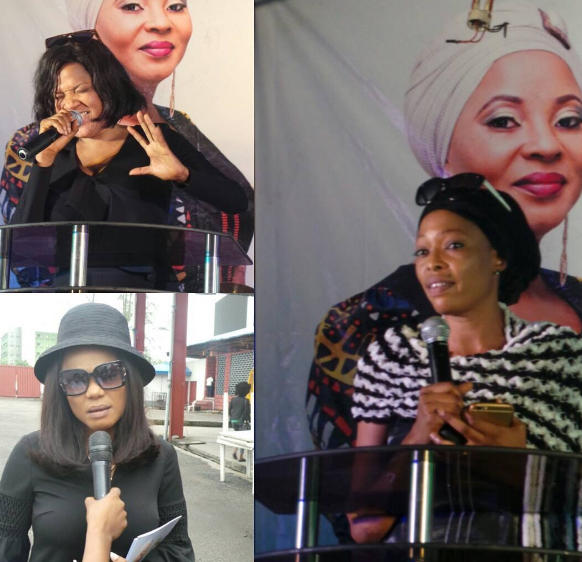 The much anticipated burial of late Yoruba actress, Mojisola Raimat Olaiya finally took place last week Tuesday 5th and Wednesday 6th June 2017 barely 3 weeks after she died on 18th May 2017 at a Canadian hospital following a heart related issue as it was reported. The 2 day event started with a service of songs which was held on Tuesday at the Lagos State Television’s Blue Roof Events place, where most of her colleagues who couldn’t come the following day converged . The second phase of the programme was the burial which was held Ebony Vault, Ikoyi, Lagos.  City People GBOLAHAN ADETAYO attended the 2 programmes and he brings you the details of  the burial ceremony.
City People GBOLAHAN ADETAYO attended the 2 programmes and he brings you the details of  the burial ceremony.
UNENDING DOWN POUR
The programme was unable to start by 4pm as it was re-scheduled by the organizers owing to the heavy downpour, which seemed unending.  Though, the true friends of Moji were already at the venue even before 4pm but some minutes after, the programme kicked off as Yoruba actor, Yomi fabiyi, who was waiting for his co-anchor, Princess, mounted the stage to observe a minute silence for Moji before the show began. Subsequently, the Nigerian national and Ekiti anthems were also sung.
WELCOME SPEECH BY COMMITTEE CHAIRPERSON
Immediately after the anthems, the chairperson of the occasion, Fathia Balogun climbed the podium for her welcome speech. She also used the privilege to acknowledge the presence of the important personalities at the occasion such as the likes of Chief YemiElebuibon, Oga Bello, Bayowa Films, Keji Yusuf and others some of.

MEET THE BURIAL COMMITTEE
They are Yomi Fabiyi, Fathia Balogun, Foluke Daramola, Bisi Ibidapo Obe, Bimpo Thomas, Taiwo Adebayo & Kemi Afolabi
SIKIRU LEMON OPENS PERFORMANCE FLOOR
At the occasion, the first entertainer to open the floor for performance was fast rising fuji musician known as Sikiru Lemon.  Despite a saddened heart; the musician showed the professional  in him as he eulogized Moji Olaiya.
TRIBUTES GALORE
This is the segment most people had been waiting for at the occasion to express their feelings about Moji’s untimely death. Most people also used the opportunity to share their experiences with the deceased and what her death has taught them within the last few days. Actors, actresses, veteran entertainment journalists, musicians, siblings and friends of Moji were given  the chance to talk about her.
PASTOR, ISLAMIC CLERIC TAKE ON THE SERMON
As expected, 2 Lagos men of God were invited on stage to give sermons. The first was done in a Christian way and the other part was handled by  popular Islamic Cleric, Alfa Alufilani, who challenged the congregation particularly actors on the way they live their lives, using Moji Olaiya’s simplicity and the good life she lived as example.
FEMI ADEBAYO WEPT
Well, one can call the meeting a “weeping gathering” as several actors and actresses, especially the young ones and her mates were sighted crying.The cleric called on the burial committee and friends of Moji to come to the podium for a special prayer. Afterward, the Special Adviser to Kwara State governor, Femi couldn’t hold his emotion as he burst into tears. He also did the same when he and Muyiwa Ademola were giving their tributes.
ATORISE, BUSOLA OKE, OBA ARA PERFORM
Though, it was a sad musical concert but these 3 gospel singers, Evangelist LanreTeribaAtorise, Busola Oke and Evangelist RotimiOnimole aka Oba Ara’s performances were touching. They composed new songs for her which they performed differently.

….AND TOYOSI ADESANYA CHANGED THE ATMOSPHERE WITH A SPECIAL NUMBER
Before now, not everyone was aware that star actress, ToyosiAdesanya is a good singer until when she stormed the stage to perform a special song she composed for Moji Olaiya. Her performance took a while and very touching and emotional. After her presentation, Toyosi revealed that Moji actually discovered the music talent in her.
IS THIS MOJI OLAIYA’S HUSBAND?
That was the question on the lips of many guests at the artistes’ nite when a man was spotted sitting very close to the family. This man was seriously weeping and he was always looking downward most of the time. Many were of the opinion that he is the actress’ husband. Efforts made by journalists present at the event to have him interviewed proved abortive as he kept crying for a long time. One thing City People reporter observed was that, Moji Olaiya’s first daughter, Adunoluwa Faronbi kept going to him for confidential discussions. Anyway we think  he might probably be the Mr Faronbi who is  Adunoluwa’s dad.
SERVICE OF SONGS OR FASHION PARADE?
The event which was supposed to portray mourning of a sister and colleague in the Yoruba movie industry ended up looking like a fashion show as celebrities and artistes did not look like they were  mourning the deceased with their glamourous mode of dressing. Indeed  they looked like they were competing for attention for the most body revealing outfit.
WHO IS OKESOLA?
Well, that is another crucial question that was asked after Moji Olaiya’s remains was brought back to Nigeria. Immediately the airport released her body, photos and video went viral on social media. The case where she was packaged with AIRWAY BILL: MAWB-0744728..was labeled OLAIYA OKESOLA. Another rumour came up, claiming that Okesola is the father of her new born baby. But City People research revealed that Mr Okesola was her legally married husband whom the Canadian Immigration recognized.

MOJI OLAIYA’S BODY ARRIVES!
Exactly 8pm on Tuesday, some of the planning committee members led by Taiwo Adebayo aka She Body and media guys moved to the Murtala Airport to receive her remains. Then, many were hoping that she will be brought to LTV 8 same night.
WELCOME TO EBONY VAULT
The who is who in the Yoruba movie industry and also in the media converged at the Ebony Vault Cemetery, Ikoyi , Lagos to pay their final respect to the actress at the early hour of last Wednesday. The atmosphere was sober as series of tears and comments were coming from her colleagues. Before the arrival of anyone, the family and the burial committee put her body in a room at the cemetery where her colleagues and some family members were only allowed so see her body. A few minute to 12 noon, some Islamic clerics came to do the burial rites at the same room. No media personality was allowed to be there apart from her family members and some members of the committee. The clerics came out to preach to people about death and how to live their lives uprightly.
….AND MOJI’S REMAINS UNVEILED
This is the moment everyone was waiting for. Her corpse was brought out from the room to the main auditorium. The weeping was loud this time as people stood up to get a clear view of her remains. The clerics and the Muslims at the venue prayed for her and she was taken to a special place made available for her to rest.
WHO OWES  MOJI OLAIYA?
Before she was buried, the Islamic clerics who officiated at the burial made several announcements at the cemetery asking  if Moji owes anybody or if anyone owes her, even if it is a pin. The man of God explained the implication of keeping mute if a dead person owes anyone or somebody owes the dead and the person stays mute before he/she is buried.
ROLL CALL
Sunday Esan, Alabi Pasuma, SalawaAbeni, Eniola Badmus, FathiaBalogun, Saidi Balogun, Tunde Owokoniran, EbunOloyede, Chief Elebuibon, DoyinKukoti, RammyChitta Bay, Oga Bello, Taiwo Oyinjasola, RonkeAjanaku, Remi Ilori, JideKosoko, LaideOlabanji, Baba Tee, Niyi Johnson,  Barrimade, Ogogo, BukkyFagbuyi, Yomi Olorunlolaye and many others.
Full Details of How Late Moji Olaiya Was Buried in Lagos + Why her Husband Was Visibly Missing was last modified: June 13th, 2017 by Gbolahan Adetayo