Gambian Dictator Yayha Jammeh’s Lawyer Flees To Senegal, Advises Him To Step Aside 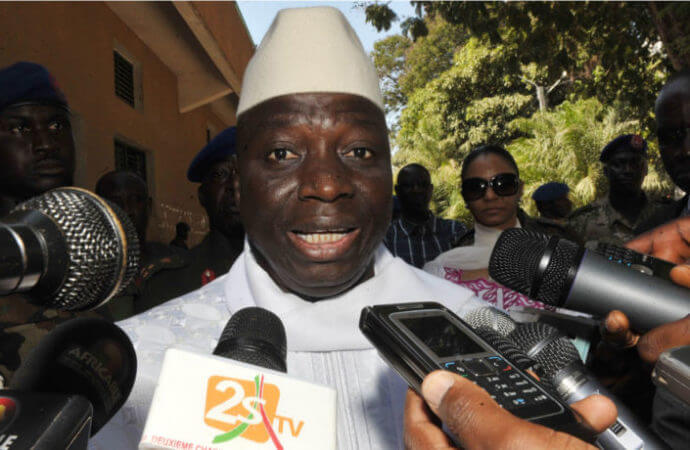 Edward Anthony Gomez, the lawyer to embattled President Yaya Jammeh of Gambia, has fled to Senegal and advised his client to step aside and respect the wishes of Gambian people as expressed in the presidential election results.

Mr. Gomez said the decision to flee to Senegal along with his son was because of the increasing tension in Gambia and in the interest of peace and stability.

The lawyer announced the development in a letter dated 17 January, which he personally signed. He said he escaped a round-the-clock security watch around his house to flee to neighboring Senegal, where he said he has now found some inner peace after being coerced to be part of President Jammeh’s plot to cling to power.

Mr. Gomez advised President Jammeh to avoid a gruesome end to his stay in office.

“Everything except God’s kingdom comes to an end. I advocate for a peaceful end, rather than a violent and gruesome end. Please, in the name of the most merciful God, do not allow your legacy to be described as one where ‘the pen of sword dipped in innocent blood writes its history on the rough pages of tyranny

“The general perception is that after midnight on  January 18th, 2017, the mandate of President Yaya Jammeh would expire and President-elect, Mr. Adam Barrow, would be sworn in as president in line with the dictates of our constitution. Any attempt to interrupt this ceremony, it is clearly understood, opens The Gambia to attack from ECOWAS forces,” Mr. Gomez wrote.

The lawyer also gave a hint into his relationship between President Jammeh and lawyers working on the dubious election petition filed by the beleaguered President and his party, the APRC, before the country’s Supreme Court.

“As a lawyer representing President Jammeh and the APRC party in the ongoing petition filed on his behalf at the Supreme Court of The Gambia, I have to admit that I was working under tremendous pressure and coercion with the said petition. As the retainer lawyer for the APRC, I could not refuse the brief on professional grounds, despite my apprehension,” he wrote. 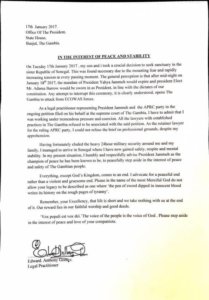 Gambian Dictator Yayha Jammeh’s Lawyer Flees To Senegal, Advises Him To Step Aside was last modified: January 19th, 2017 by Reporter