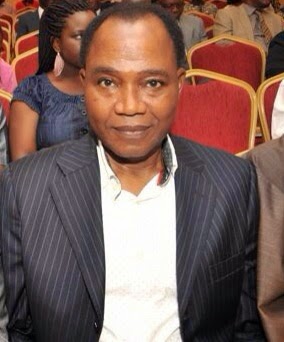 The fun-filled annual luncheon organised by the Lagos Branch of Government College Ibadan Old Boys’ Association (GCIOBA), has come and gone but the memory lingers on. The event which took place on Sunday, 21st May, 2017 at the City Hall, on Catholic Mission Street, Lagos Island had the Theme: Oil Subsidy: A Perspective From The Field, had many of the old boys from near and wide gather together to felicitate with one another.

The National President, Mr. Biodun Jolaoso while welcoming the old boys, their wives (who he called young girls) and guests to the occasion, said over the years, GCIOBA had made relentless efforts to convince the Oyo State government to hand over the management of the school to the body (Association) but to no avail.

He said however, the state government has finally come up with a new policy guideline for Education.

“The state government has set up School Management Boards for all secondary schools in the state, including Government College, Ibadan”, he said.

Jolaoso explained that GCI has suffered a lot of neglect from the various state governments, hence, the need for GCI old boys to make concerted effort for its restoration which, accoording to him, will require urgent financial intervention.

He said the association has resolved to raise the sum of N250 million to support the restoration project.

“The Oyo State Government has set up School Management Boards for all secondary schools in the state including the GCI. The boards have been inaugurated and 12 scholarships have been awarded. GCI has suffered a lot of neglect from the state government, hence our concerted efforts for its restoration.”

The Chairman of the Lagos Branch of Gcioba in his speech, Prof. Yomi Akinyeye,who is of the 1972 set, said the 2017 GCIOBA Annual Luncheon and Merit Awards Ceremony was to thank God Almighty for His mercy in-spite of the insecurity and recession in the country.

“We thank God Almighty for counting us worthy to be among those to witness this year’s Annual Luncheon. Since last year’s edition, so much has happened within the country and the world at large with serious consequences for individuals. There has been security challenges with kidnapping, armed robbery and Marauding Herdsmen on the prowl”, he said, adding that the national economy had gone into recession with attendant job losses and debilitating social disorientation.

He noted that the ever present high level of corruption continues to threaten the economy of the nation and undermine its ability to fulfil its obligations to the nation.

The price of crude oil, which was the theme of the event, according to Akinyeye, fluctuated with serious impact on the national budget.

The Chairman of the occasion, Chief Ajibola Ogunshola who is also an old boy, commended the Lagos branch of the association for appreciating notable members of GCIOBA for their contributions towards the development of the school and the education sector in general.

While commending the GCIOBA 2017 Merit Award Winners, Ogunshola challenged other members of the association to put in more hard work to boost their chances of being recognised in future by the association.

The chairman commended the keynote speaker, Femi Adeyemo (an old boy of the 1976 set) is the Chief Financial Director of Oando, for laudable feats he had achieved in his career.

Adeyemo, who delivered a paper with the theme, ‘Oil Subsidy: A perspective from the field’, noted that the Federal Government was spending between N750bn and N1tn on oil subsidy every year.

He argued that the amount the Federal Government spent on oil subsidy on an annual basis was more than the last annual budget of Lagos State estimated at N662bn.

Seventy per cent of the benefits of oil subsidy, according to him, accrues to only a few Nigerians.

“We are not looking at kerosene subsidy that actually impacts the poor. The price of kerosene has increased by about 300 per cent in the last 18 months,” he added.

Adeyemo said there was a need to channel the huge funds spent on oil subsidy on an annual basis on infrastructure in order to make the country a better place for all.

The Chairman, Planning Committee, Mr. Edward Akerele, during his remark said 2017 is yet another watershed in education in Oyo State, with the government deciding to hand back some of the schools to the founders which according to him, Government College, Ibadan is well placed to take advantage of.

“We hope that the luncheon will make old boys join us in supporting the cause to bring back the school to its original glory”, he said.

He further admitted that the culture and tradition of academic excellence have been eroded by the inactions of successive administrators and poor education policies in the state, saying that upon poor maintenance, many of the college buildings have become dilapidated and educational materials therein are obsolete. He said: “The onus now lies on old boys to revamp our ageing legacy, our collective heritage, our GCI. It is about time we all came together to restore its tradition of academic and sporting excellence, as well as its culture of inculcating leadership orientation in the current students.”

In his speech, the Guest Speaker, Mr. Femi Adeyemo,  said the Federal Government has spent about N9 trillion on oil subsidy in the last 10 years.

He advised the Federal Government to drop oil subsidy in order to enhance infrastructural development and economic growth.

He told the gathering which included the Punch Chairman, Mr. Wale Aboderin, that the foundation would raise N250m to build boarding facilities, house masters’ quarters and embark on other projects in the school.

At the event awards were given to those who merited it. The awardees were honoured and urged to be at their best in both their endeavour and committment to the branch.

The awardees were given to Eng. Segun Kehinde  a highly resourceful, committed and accomplished professional Engineer who was recognised for his immense contribution to the development of the Telecommunications sector in Nigeria, and also, his contribution to the growth of his 1970 class set and committment to GCI and GCIOBA.

Kehinde was honoured with the GCIOBA (Lagos Branch) Merit Award 2017.

AMCON to Sell Peugeot Automobile to Dangote and Two States

Whom is difficult to study at school...